Why We Needed a Vigil for Democracy

Standing in solidarity with communities targeted in the 2016 election. 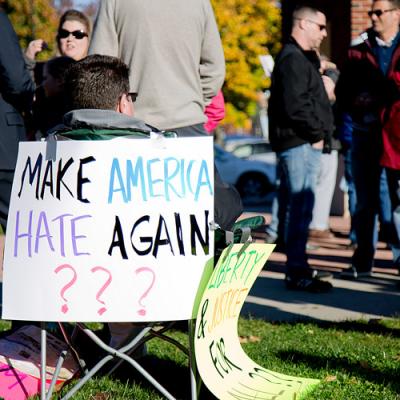 The headlines: "Racist graffiti greets Trump win across USA," "Trump Supporter Reportedly Punches Woman," "KKK Plans March to Celebrate Trump." And on social media: "My students are being harassed," "I had a woman yell at me because of my hijab," "I'm scared to go outside, you guys."

This is Donald Trump's America. And it's why I organized a Vigil for Democracy on Sunday, Nov. 13, when over 100 people came out to stand in solidarity with vulnerable communities – and against hatred, bigotry, and misogyny.

To be clear, I was disappointed with the election results on a policy level. From our new state senator to the POTUS, voters went with a squad that thinks liberating more wealth for the richest Americans will magically lead to jobs, infrastructure, and possibly 50s-style casual wear.

Okay. That's politics. The people and policies I prefer don't always win. Their ideas have been tested, and we've seen these kinds of policies fail for – oh, dear – my entire life. I think it's wrong, shortsighted, redundant; but it's not outside of typical American political affairs. We have different ideas about the role of government, always have. But over the same course, we've seen racial dog-whistles trotted out to build a coalition of people by dividing them.

Donald Trump brought something even worse: a play to outright hatred. Hatred of Mexicans, Muslims, the LGBT community, and women. Trump reaped this unrepentant hatred, but the seeds were sown by Nixon's southern strategy, the Willy Horton ad, and all the attempts to invalidate the first African-American president. Trump didn't create all of those things; he built upon them. Traditional conservative candidates have long been happy to refer to the "inner city," or "thugs," but when the KKK gives them a "hell-yeah" they feel compelled to denounce it. Not Trump.

Of course those who traffic in hate feel permission to lash out with violence and intimidation. Their guy won, and not in the way the other leaders have. Here come the swastikas, the beatings, the bullying. In America. In 2016.

Erie County voted for Trump. Erie County is 88 percent white. But the city of Erie has more Syrian refugees than New York City and Los Angeles combined, a vibrant African-American community, and a thriving LGBT community. We all live here, together.

Make no mistake, standing for solidarity and unity against hate is now an act of defiance. We were compelled to stand up for these values, because after decades of assault, they hang by a thread.

The Vigil for Democracy wasn't to lick wounds after a disappointing election, nor a benign call for us to get along in spite of our differences. It was a show of power, for those who have been targeted and are vulnerable, against those who take Trump's ascendance as license to attack.

We stood for the most basic human and democratic principles, which is why the TV coverage largely made it out to be an inoffensive call to come together. But make no mistake, standing for solidarity and unity against hate is now an act of defiance. We were compelled to stand up for these values, because after decades of assault, they hang by a thread. We came together because we are dangerously close to losing the civility and respect that ensures our individual and collective survival.

Daniel Doubet is the Northwest PA Organizer for Keystone Progress. He can be reached at dan@keystoneprogress.org.