Surprise! Wilco has a new album called Star Wars, and it packs a punch. 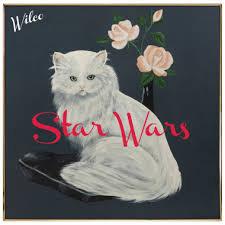 Surprise! Wilco's release of Star Wars Thursday, July 17 caught everyone off-guard. And don't take the option to download the album for free as a warning; this album delivers much more than a straight to Crackle release. Opening track "EKG" sets the tone with loud, garagey dissonance. From there, the album assumes a collage of sounds in an apparent effort to decode the opening chaos. Catchy hooks, psychedelic builds, and mellow tones all suspend the diverse vocal performance put on by Jeff Tweedy and company. Lyrically, the album does not disappoint. Moments of clarity intermingle with those moments of poetic ambiguity that we've grown to attribute to Wilco, culminating in the album's final moments where we "realize we're magnetized." Timing in at only 33 minutes, the sheer scope of the album keeps it from feeling short.  Star Wars certainly has something to offer everybody, and old fans of Wilco will not be disappointed. – Nicolas Miller