In an awards season full of biopic enormities, Wild emerges and wins your heart with its quiet ingenuity. 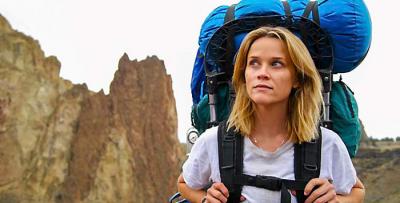 In an awards season full of biopic enormities (The Theory of Everything, The Imitation Game, Unbroken, American Sniper), Wild emerges and wins your heart with its quiet ingenuity.

Telling the story of Cheryl Strayed, who hiked the 1,200 mile Pacific Crest Trail to try to reconcile her personal tragedy, it's the type of movie that could easily have easily have fumbled into cheap uplift in the wrong hands. Director Jean-Marc Valee (last year's Dallas Buyers Club) and Reese Witherspoon, in one of her finest performances to date, give the movie it's fighting spirit.

Adapted from Strayed's 2012 memoir, the movie chronicles her journey, both literal and proverbial, from start to finish. Writer Nick Hornby lets the story itself unravel slowly, introducing us to Cheryl's physical trials while not quite telling us why she's putting herself through the agony of the hike. Flashbacks letters give us a little more context as to what lies at the heart of Cheryl's decision, paralleling her trek in a way that melds physical and emotional extremes.

Introduced to us in pieces is her mother (Laura Dern), Cheryl's role model and strong female figure, whose death to cancer at just forty-five triggers Cheryl's downward spiral into drugs and promiscuity. Valee shows us glimpses of her from Cheryl's childhood to the devastating moment of her passing, creating a kind of stream of emotional consciousness. A scene where a teenage Cheryl, presumably non-religious, prays for her mother's health, is pure human beauty.

The same occurs with Cheryl's ex husband, who is seen as Cheryl desperately tries to reconcile their divorce and as he remains a friend to Cheryl even after the termination of their relationship.

Delving into her subsequent unwanted pregnancy and addiction to heroin, Valee and Hornby don't hesitate to make Wild harrowingly real. Never do they settle for what's on the surface of Cheryl's chronicle, and they treat her personal issues not like detached points of inspiration for viewers, but key elements to a story that is equal parts heartbreaking and inspiring.

Rather than reveling in the landscapes over which she travels, cinematographer Yves Belanger (Dallas Buyers Club) uses them more as a reference point for a story that is so consumed by one woman's experiences. Implementing songs from the likes of Simon and Garfunkel to Portishead, the film's soundtrack is gorgeously picked and edited to feel like a soundtrack to the life of Cheryl Strayed herself, with each song assuming its own personal relevance.

Delightfully, Wild is a movie that seems to be concerned with no more than telling its own story, wherever it goes.It's a deeply heartfelt chronicle of Cheryl's life, from her childhood to her healing and rebirth, and it revels in the moments of beauty that got Cheryl through, and got us through, from her first encounter with a kindhearted farmer, to fleeting encounter with a journalist who mistakes her for a hobo. The movie's humor never feels contrived, but rather a counterpart to life's absurdity.

More than anything, though, WIld works so well in the hands of Witherspoon, who scales its rocky emotional terrain to let us connect to a woman's confusion, tragedy, and realization that it was all worth it. Strayed was one of the only women at the time to conquer the Pacific Northwest Trail at the time, and Witherspoon channels her strength feminist determination while remaining conscious of the woman's life as a whole.

Wild explores, wonders, and excites, but it is, more than anything, a tribute to female ingenuity and our ability to find healing in the strangest of places.