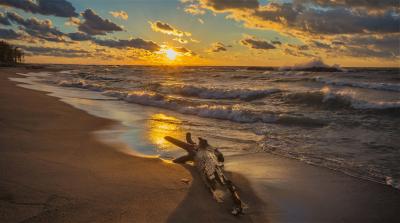 On the surface, Lake Erie has a lot going for it — the gem-like shimmer of its sunrises and sunsets, some of the world's finest freshwater fishing, and recreational opportunities galore.

Beneath the surface, it's a bit of wreck — actually several. The shipwrecks of the Lake Erie Quadrangle are estimated to have exceeded 2,000 — although only about 800 to 1,000 are still intact.  The Quadrangle is a roughly 2,500 square mile area formed between Conneaut, Ohio and Port Burwell, Ontario in the west and Barcelona, N.Y. and Nanticoke, Ontario to the east, with the dual sand spits Presque Isle (U.S.) and Long Point (Canada) lying in between.

In other words, Lake Erie has also gone through a lot, but we appreciate and love that about it. The Quadrangle's wealth of submerged history was the primary reason — but far from the only reason — that Erie County nominated it for national marine sanctuary designation through the National Oceanic and Atmospheric Administration's (NOAA's) Office of National Marine Sanctuaries. This designation would recruit additional national resources to protect the aesthetic, ecological, economic, and historical bounties of our home waters.

There are currently 14 national marine sanctuaries established through the system, stretching from north to south and coast to coast (and beyond, with two out in the Pacific).

There are two more in designation (e.g. on their way to becoming officially official) — both of which (Lake Ontario and Wisconsin-Lake Michigan) happen to be in the Great Lakes region. The Quadrangle could be on its way to joining them, but it must pass the NOAA's consideration process first — and they're giving themselves plenty of time to let the decision marine-ate — until Feb. 22, 2026, to be exact.

After that, the NOAA verified that the community — from individuals to citizen groups to government to "topic-based stakeholder groups" (e.g., environmental, recreational, historical groups organized at a local, regional, and/or national level — really wanted it. It next looked at how impactful its assistance would be, in terms of whether it might:

However, this all happened five years ago — Erie County first submitted the nomination on Dec. 31, 2015 and it was accepted in February 2016. This February, the NOAA informed Erie County Executive Kathy Dahlkemper that the Lake Erie Quadrangle would remain in consideration for an additional five years.

Why have we been left to toss and turn so long on this designation decision? Well, actually designating a national marine sanctuary is much more involved than simply acknowledging that an expanse of water warrants protection. The process consists of four steps and many stakeholders.

After all that, then it's officially official. Keep your periscopes on a swivel for any big announcements between now and 2026.

Matt Swanseger (mswanseger@eriereader.com) is not sure how long you can hold your breath underwater, but hopefully you'll never need to as long as it takes the government to make decisions.