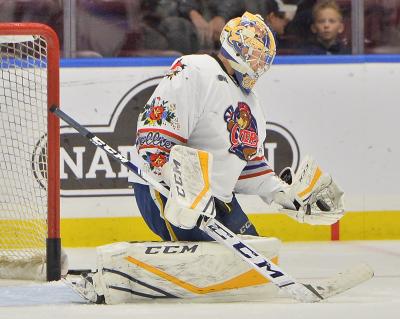 Well, it's a sliding target. After missing its traditional September start date, the Ontario Hockey League (OHL) initially announced plans to push back the regular season until December, with a slightly reduced 64-game slate. The postseason tournament was to include the usual 16 teams, eight from each conference.

When it was clear that wasn't going to happen, the league proposed a 40-game season beginning on Feb. 4, with a reduced playoff field of eight teams. However, a month-long provincial shutdown in Ontario body-checked that plan into the bench. With that shutdown only recently lifted on Jan. 23, that goal is in doubt, and shot opportunities grow ever scarcer.

We would say you Otter not get your hopes up, but the OHL's sister leagues under the governing Candian Hockey League umbrella are already moving forward. The Quebec Junior Major Hockey League (QMJHL) has been lacing 'em up since October, and the Western Hockey League (WHL) has settled on a 24-game season contingent on approval from health authorities in each of its state and provincial jurisdictions (like the OHL, the WHL transcends the U.S.-Canadian border).

The majority of players want to play, so there's definitely a will. The question is whether there is a way. Ontarian NHL teams have continued to operate throughout the lockdown, but that's because they have the finances and infrastructure to do so. The OHL would require a significant uptick in testing availability, careful coordination with billet families (whom the players stay with during their tenure with their home team), and significant governmental assistance. Like all major junior hockey squads, the Otters are a for-profit organization who depend heavily on ticket sales for revenue. To play before empty stands at Erie Insurance Arena would not be financially viable.

So for now, the 2020-21 Otters season is still on ice. In the meantime, current and former players have made their presence felt elsewhere.

Defenseman Jamie Drysdale was selected sixth overall by the Anaheim Ducks in the 2020 NHL Draft, while center Chad Yetman went 172nd overall to the Chicago Blackhawks. Neither was signed to their respective big league roster and will be eligible to return to the Otters for the 2020-21 season. Drysdale also recorded two assists for the Canadian team in the IIHF World Junior Championship tournament, which lost 2-0 to the United States in the finals.

Teammates Colby Saganiuk and Connor Lockhart should warrant draft consideration of their own after appearing on NHL Central Scouting's Players to Watch List. Each is ranked as a late-round prospect.

In total, 15 Otters found spots on NHL Training Camp rosters, with 12 playing in the regular season which began Jan. 13 (indicated in bold).

Matt Swanseger (mswanseger@eriereader.com) didn't warrant NHL roster consideration this time around, but on the plus side he is still firmly in possession of all his teeth.