Winding up for Chicago's Belmont at Basement Transmissions 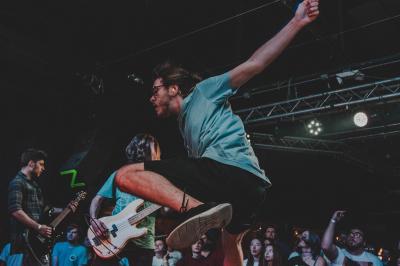 Illinois pop-punk outfit Belmont will be returning to Basement Transmissions nearly five months to the day since their last Erie performance at Amity Fest II, alongside multiple other pop-punk and emo bands.

Belmont's energetic and upbeat style is a perfect soundtrack to the possibilities and optimism that come with summer. Check out the singles "Step Aside" and "Water Weight," released last year.

On tour with Belmont are California's Stickup Kid and Canada's Rarity. Each band has a pop-punk sound with a dash of emo thrown in, to contrast their tourmate's overwhelmingly positive sound.

Opening acts for the show include Meadville-based emo/punk band Archway, with an EP released on Panic Records, Erie's own Mallory Run, whose EP Spin was released in April on Wilhelm Records, and Kent, Ohio pop-punk group Deadfall, who is starting its tour with Mallory Run one day prior.

So come out to Basement Transmissions, and don't miss out on what's set to be one of the biggest pop-punk shows in Erie this year. — Tommy Shannon