A big third period puts the Otters down 2-1 in the best-of-seven series Monday night. 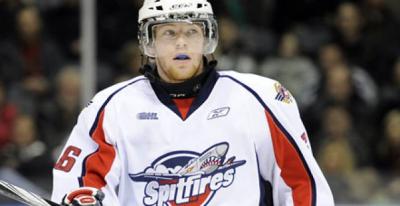 WINDSOR, Ont. – If there was any question as to who has the momentum in the series, the Windsor Spitfires emphatically answered it Monday night.

A game after losing a double overtime heartbreaker, Erie is still trying to regain its composure. More importantly, the swagger and confidence that this team carried into the playoffs seems long gone.

It disappeared less than two minutes into the third period in Game 3.

Windsor scored three goals in a 1 minute, 2 second span to quickly turn a one-goal advantage into a 6-2 lead before the Otters could get comfortable on the bench in the final frame.

In came Chris Festarini to attempt to stop the bleeding for the Otters. But the rookie goaltender allowed the first shot attempt past him as Kenny Ryan recorded his first goal of the playoffs.

Even before that, the Otters were undisciplined, as Windsor scored two power-play goals in the first period as Stephen Johnson and Jake Carrick pushed the Spits to a 2-1 advantage after 20 minutes.

The Erie goal came from the stick of Mike Cazzola, which tied the game momentarily at 1, but that deadlock lasted less than three minutes.

Shawn Szydlowski scored his own power-play goal 15:06 into the second to once again get the Otters even on the scoreboard with his second of the series.

Erie would enjoy that tie for only 2:06 as Ryan Ellis, a Nashville Predators prospect, scored what would eventually become the game-winning goal, his second in as many games.

As good as the Windsor offense was, goaltender Jack Campbell was even better.

For the second straight game, Campbell was a wall between the pipes, stopping 30-of-32 shots, including several throughout that were highlight-reel style.

In the last two games, Campbell has stopped 70 of the 75 shots and has only allowed seven goals to slip past him.

Late in the game, emotions began to boil over as Erie's Brett Appio and Windsor's Nick Czinder dropped the gloves, as Appio was trying to send a message for what could be a very chippy Game 4 in Erie Wednesday night. That game is slated for a 7 p.m. start.

As the final horn rang, Zack MacQueen, the son of former Otter coach Dave MacQueen, took a run at Erie captain Greg McKegg, setting off another scrum to end a psychical contest.

Altercations aren't what Erie needs at this stage of the season. They need to find the confidence that they had the final eight games of the season where the squad didn't lose a game, which propelled them in to the postseason.

Game 3 became that much more important for the Otters. A win ties up the series and may shift the momentum back in their favor.

A loss sets up heading back to Windsor down 3-1 and facing elimination-- a thought nobody considered this early in the playoffs.

~For full coverage on the Otters and the rest of the OHL playoffs, follow Alex Sibley on Twitter @ErieReaderSport.