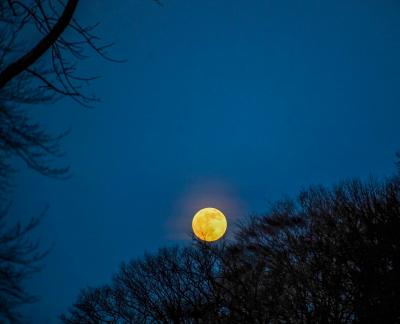 Jessica Hunter
This year's Wolf Moon, or the January full moon, will peak on Thursday at precisely 6:07 p.m., and what better place to observe than nature? Join the pack at Asbury Woods or Erie Bluffs State Park.

Had your fill of the indoors?

Then maybe you should go to howl … at the heavens. This year's Wolf Moon (i.e., the January full moon) will peak on Friday at precisely 6:07 p.m., and what better place to observe than nature?

Join the pack at Asbury Woods on Friday evening for a Wolf Moon Hike, where you'll get to sniff around the history of full moon naming conventions, play games, and get a glimpse into the mechanisms of human night vision (who would rod themselves of that?!) This hunt for knowledge begins at the Brown's Farm Barn before dispersing into the night — organizers strongly advise you wear closed-toe shoes and weather-appropriate outerwear.

Further west, night hikers are invited to tour the Erie Bluffs After Dark under the light of the same Wolf Moon. Pennsylvania Department of Conservation and Natural Resources personnel will comment on the local nightlife (which does not include wolves, but does include coyotes), along with the wildlife and resource management practices that have been installed to sustain Erie County's other (beautiful) state park.

The Wolf Moon, along with the names of the other full moons throughout the year, originated through traditions of ancient European and Native American tribes, who organized their civilizations according to the lunar calendar as opposed to our current solar calendar.

There are up to 13 full moons throughout the year, with the odd moon out known as a "Blue Moon." This is one such year, with a Blue Moon (Aug. 30) falling within the same month as the Sturgeon Moon (Aug. 1) — both supermoons, as the moon will be at its perigee (point in its elliptical orbit when it's closest to Earth).

In contrast, January's Wolf Moon is what's known as a micromoon (moon at apogee, or point in its orbit farthest from Earth). It is so called because during the time when wolves ranged far and wide, their howling was said to be more prevalent in the year's earlier months, likely a prelude to their breeding season. Contrary to popular belief, wolves don't howl at the moon — they merely tip their heads toward the sky to broadcast their feelings more clearly.

Are there wolves in Pennsylvania?

The gray wolf, ancestor to domesticated dogs, once freely roamed all of Pennsylvania (and two-thirds of the current United States), but the last known wild specimen died in 1892. The overlapping of human settlements and lupine territories hastened the gray wolf population's decimation, although they are making a modest comeback in some places, predominantly the northern states and Canada.

Conservationists estimate the current U.S. wolf population to be around 18,000 or more, with Alaska being home to roughly two out of every three. Wolves are beneficial to maintaining the balance of various ecosystems, with a dietary preference for ungulates, or large hoofed mammals such as elk and deer. In Pennsylvania, our rampant white-tailed deer population can be attributed at least in large part to the disappearance of wolves.

Reintroduction, however, remains controversial in many places, and is only advisable in areas where wilderness is vast enough and prey sources are plentiful enough to support the wolves and avoid encounters with humans. It is improbable that they will ever be seen again in Northwestern Pennsylvania outside of captivity.

Nonetheless, we can tip our heads toward the full moon and still pretend we're running with the pack.