Woman to Appear on #TheNew10

The Treasury Department will place a woman on the new $10 bill. Who it will be could be up to you. 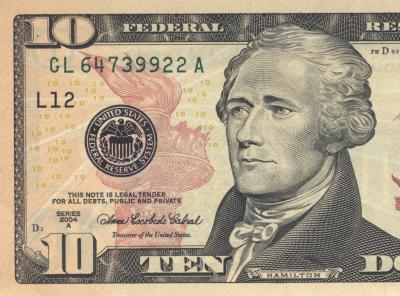 After nearly 120 years the face of a woman will return to U.S. currency, the U.S. Treasury Department announced Wednesday. Who it will be, however, remains a mystery.

The last woman to appear on an American bank note was Martha Washington, who was on the $1 silver certificate in the 1890s.

The yet-to-be-named notable woman will appear on the new $10 bill, which will be unveiled in 2020 when the $10 bill is scheduled for a redesign.

A petition circulated last year called for a woman's image to replace Andrew Jackson on the $20 bill, but Treasury secretary Jack Lew says the decision to revise the $10 – and to include a woman on the new note – began before he arrived at the Treasury Department in 2013. The $10 bill, Lew said, was selected because it is next in the design cycle, which is in place to prevent counterfeit and fraud.

Harriet Tubman, Rosa Parks, and Amelia Earhart are among the historical figures suggested on social media to replace Alexander Hamilton in 2020.

Traditionalists need not worry, though. Lew says that Hamilton isn't being completely replaced. Hamilton's likeness will remain either somewhere on the new $10 or on a separate series of $10 bills.

Lew will have the final say in who is selected for the new $10, but the Treasury Department is seeking public comment through a series of town hall meetings, its website, and social media using #TheNew10 hashtag.