Standing up for good in Trump's America 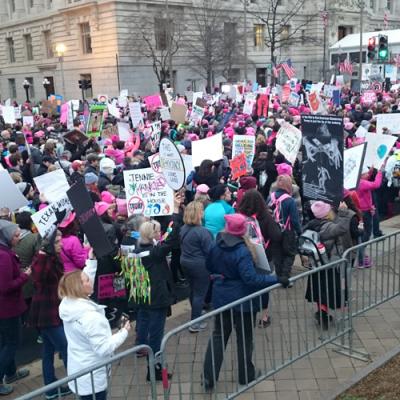 I wasn't expecting to be standing with well more than half a million people in Washington, D.C. on Jan. 21. Nor had I conceptualized or ever worn a "pussy hat," a pink cap with pointed cat ears. Then again, back during the primaries when Donald Trump was leading in the polls, a friend remarked on social media, "This is a joke, right?" And I agreed it had to be.

But here I am, and here we are with a new president who gives many of us pause.

With the remnants of the inauguration surrounding us, and his harsh words about "American carnage" still burning a hole in my psyche, I stand amidst fathers with daughters and mothers with sons, people of every color, culture, age, ability, and gender. In his address the day before, Trump promised, "The oath of office I take today is an oath of allegiance to all Americans."

I repeat, all Americans.

So, I wondered, would that woman over there in a hijab have his ear? Can that same-sex couple over there stop worrying that their legal marriage might suddenly disappear?

The new president also suggested that the triumphs of the Washington establishment did little for our nation's struggling families, which seemed brutally insulting to an Obama administration that implemented the Affordable Care Act, allowing more than 20 million Americans to access health care, some for the first time. I also recalled how, in 2015, the Supreme Court ruled that states could not bar same-sex couples from marrying. Just those two acts alone reduced hardships for many families.

Trump also said, "we are transferring power from Washington, D.C. and giving it back to you, the people."

Experts estimate that between 500,000 and 1 million people showed up for the Women's March in Washington, D.C. alone to hold him to that promise.

The flood of people was a wide and diverse river. Even before arriving downtown, I felt the drumbeat of activism at the suburban Metro station. People carried signs that were funny, vulgar, thoughtful, and sincere. We had to wait on the platform as five packed trains came and went full of cheering people. When our turn came, we cheered too, and waved at those still stuck waiting for their ride at subsequent stations. They waved back. While there was undoubtedly anti-Trump fury in the air, there was also joy, a positive spirit, and a marshaling of optimism.

Mary Scutella, an Erie resident who hails from a family of social activists, remarked, "We are a sea of people standing in solidarity. We have nothing to really gain from this except the knowledge that we can still trust strangers. And that together we are unstoppable."

The crowd was unstoppable in its exuberance; but not in its motion, as the press of humanity quickly filled every pocket of space around the National Mall. As we slowly made our way through the growing sea, the mood never soured.

David Dennis, owner of Lake Country Bike in North East said, "I am still trying to wrap my mind around the experience of so many culturally different Americans standing united. There was no violence, no panic, and no chaos, but unbelievable order."

Everyone worked hard to not step on toes and apologized when then did. A young black woman gave up her turn at the porta-potty to guard an elderly white woman's walker. Another woman stood nearby handing out tissues to compensate for the lack of paper in the facilities.

America on inauguration Friday might have been the flags and the pomp and peaceful transition of power. But the America I embrace showed up in force on Saturday, with rainbow flags, compassion for all, and an optimistic gleam in its eye, ready to fight for what it believes in.

America on inauguration Friday might have been the flags and the pomp and peaceful transition of power. But the America I embrace showed up in force on Saturday, with rainbow flags, compassion for all, and an optimistic gleam in its eye, ready to fight for what it believes in.

Since the march, though, the president has signed orders to defund U.S. women's health initiatives internationally, reinforced his support for oil exploration, directed the Environmental Protection Agency and the U.S. Department of Agriculture to stop communicating with the public, instituted a temporary ban on most refugees and a suspension of visas for citizens of Syria and six other Middle Eastern and African countries – and is laying the foundation for his wall.

At his inauguration, Trump said, "We all enjoy the same glorious freedoms and we all salute the same great American flag." As a veteran, I say hear-hear to the latter and happily honor the flag of my country.

I would disagree that we all enjoy the same freedoms, however. Women, immigrants, gays, lesbians, the transgendered, and people of color still face stubborn discrimination, and are fighting for equality in healthcare, wages, and the justice system. Yes, freedom is not a synonym for equality. But equality makes true freedom achievable.

Lisa Gensheimer, a writer, documentary producer, and Erie Reader contributor from North East, said she came because she wanted her "grandchildren to have a planet to stand on, clean water, fresh air, and a world where all people are treated equally with love and compassion and have the same economic opportunities." That sentiment was echoed throughout the day.

I also spoke with Delaney Hayes, age 14, who came from Oak Harbor, Ohio with her mom, aunts, and cousin. She came because "I'm already thinking ahead, and I want to be guaranteed equal pay for equal work." Who could deny her that simple dream?

But, you know, we all have a Delaney. My granddaughter, your great-grandson, your neighbors' adopted infant from Kazakhstan. In fact, somewhere between 3.3 and 5.2 million people in 653 cities across the U.S. all have Delaneys, evidently, as that's how many people stood up to be counted. It is our task to see that all of our Delaneys get a decent future. See you on the barricades.