Woodward Waxes on 'Lessons Learned from Watergate' in Jamestown

The iconic investigative journalist on how past connects with future 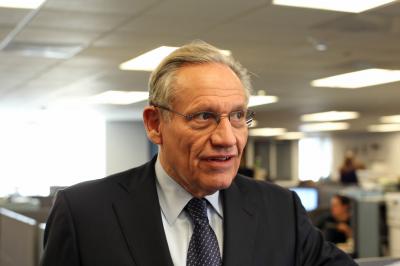 Author and Washington Post journalist Bob Woodward, renowned in his field for his incisive brand of political reporting, spoke at Jamestown, N.Y.'s Reg Lenna Center for the Arts on Aug. 11. Woodward's latest book, *Fear: Trump in the White House, profiles our 45th president's first two years in the Oval Office.

Forty-five years after the Watergate Scandal that ultimately led to the call for impeachment and the subsequent resignation of President Richard Nixon, famed journalist and living legend of the industry Bob Woodward addressed a crowd of nearly 500 in the Reg Lenna Center for the Arts in Jamestown, N.Y. on Sunday, Aug. 11. Thanks to the Robert J. Jackson Center, he was there to discuss "Have We Forgotten the Lessons of Watergate?" and, of course, the 45th President of the United States — the subject of his latest book.

On the heels of 2018's best-selling Fear: Trump in the White House — his 19th overall — Woodward waxed on the lessons learned from Watergate and what those mean to us today.

Woodward began with the central role of truth in our political system, democracy, and in our rule of law. "The president has destroyed the common agreement of what is a fact," he said, exploring Trump's tropes of "fake news" in a world of "alternative facts."

Woodward recalled the nuclear disaster at Chernobyl, noting the titular 2019 HBO mini-series. While the Soviet Union went to great lengths to obscure the truth from both its people and the world, Mikhail Gorbachev admitted in 2015 that the event and the government's handling was the beginning of its unraveling and demise.

Woodward, an associate editor for the Washington Post, where he's been since the early '70s, added that another lesson is that the president has to hold moral authority. He quoted Nixon's parting words: "Always remember that others may hate you but those who hate you don't win unless you hate them. And then you destroy yourself."

Nixon, Woodward noted, had realized what he had done to the country and to the presidency and knew what needed to happen: He needed to leave the office.

"What is the job of the president?" Woodward asked. "The president ideally should ask the question: What is the next step of good for the country? Not the party but all of the people."

"Trump," he said, "has turned hate into ammunition for warfare."

The damning thing to come from the Watergate tapes, Woodward explained, was that they "exposed the ugliness of Nixon's own mind." What was private, the American people heard in the light of day. Today, the president says "lots of things Nixon said secretly on his tapes … on the White House lawn — or in tweets."

"President Trump has legitimized hate and violence," Woodward said. "This has happened before our eyes."

Woodward explored the roles of Senators Barry Goldwater and Hugh Scott, the voice of '60s conservatism and the minority leader at the time, respectively. As impending impeachment loomed for Nixon, Goldwater told Nixon that he had consulted Republicans to see how many would vote to save Nixon from impeachment. "You have four votes, Mr. President," Goldwater told Nixon, as Woodward told the audience, "and one of them is not mine," making clear that GOP legislators were putting the country before the party.

The Pulitzer Prize winner, who shared in awards for his Watergate coverage with fellow investigate WaPo journalist Carl Bernstein, as well as that of 9/11, turned his attention to his industry, recalling a letter that then-publisher of the Washington Post Katherine Graham wrote to Bernstein and him. It warned them of the "demon of pomposity" that "stalks the halls of Washington everywhere," encouraging them not to let the celebrity go to their heads. And it called them "not to be spooked from the job of maintaining an aggressive edge" in their reporting.

"Trump criticizes the news because we are doing our jobs," Woodward said. He cautioned that the media mustn't turn their work into a "them versus him."

Woodward told the audience that upon hearing news that Fear, which chronicles the lead-up to the 2016 presidential election and the first two years of the Trump White House, would be coming out, Trump called him.

"Why didn't we talk?" Trump asked Woodward. "I tried," Woodward said, recounting how Trump's circle denied him access to the president prior.

Woodward drew to his conclusion, noting an interview he secured during his coverage of President George W. Bush with a four-star general who went unnamed. The general had repeatedly declined Woodward's request for interviews. But Woodward still persisted.

"What's the best time to knock on the door of a four-star general?" he asked the crowd.

"In the morning!" someone from the audience shouted.

"Whatever your profession is, you should stay in it," Woodward said, drawing laughter.

His rationale: Mondays are too early in the week; things are just getting started. Wednesdays onward, folks are thinking more about the weekend than their weeks. And in the mornings, the general would be participating in PT to preserve his physique. Plus, he made have had a few "pops," which might make him more inclined to talk.

So Woodward knocked. And was greeted by: "Are you still doing this shit?"

Woodward gave a simple-yet-profound glimpse into how he's deftly been able to get people to talk, often saying a lot of things, that in their own self-interest, they probably shouldn't: "Show up, shut up, and listen," letting the "silence suck out the truth."

The general then invited him in, and they talked for two hours.

Speaking at the invitation of the Jackson Center, an institution preserving the legacy of the former Supreme Court justice and U.S. attorney general, Woodward concluded by noting the eulogy Jackson offered for President Franklin Roosevelt.

"No one but Roosevelt could bow so many human heads in a common sorrow and that sense of personal loss," Woodward said, quoting Jackson. "People feel less secure today because he is gone. He thought of no human being but himself as expendable."

"I read this, and I asked myself, 'Who will readily give such a eulogy for Donald Trump?'" Woodward posed.

A scattered chorus of "No one!" emerged from the audience.

"That's what I wrote down," Woodward responded, laughing.

Philip Graham, publisher and later co-owner of the Washington Post, once remarked: "Journalism is the first rough draft of history."

We are living our history — which means we are unpacking these lessons in real-time, drafting as our learning moment remains ongoing.

Nearing the point at which the class bell rings, knowing the lessons will and must continue, hoping that we might return to our desks ready to reflect tomorrow on today's occurrences, Woodward finished with his big question.

"It's not just the people who voted for Trump," Woodward said. "We all are responsible. The country elected him. The big question we have to ask is: What have we done to ourselves?"

History and time will tell. But sooner rather than later, we will again have the opportunity to learn from Woodward. He is working on a forthcoming follow-up to Fear, which will cover Trump in the White House years three and four, and for which, he said, he will again attempt to interview Trump.

Whether years five through eight follow for Trump or Woodward will have the opportunity to report on a 10th president in his already impressive catalog, the American people will decide in November 2020, when we ask not just "what have we done to ourselves?" but: What do we want to do now, as we anticipate the drafts of our future knowing the lessons we know now?