Shriek feels more like a screech than it does a warm, dreamy coo over the course of ten tracks.

by Alex Bieler
View ProfileFacebookTwitterInstagramGoogle+RSS Feed
May 28, 2014 at 5:50 AM 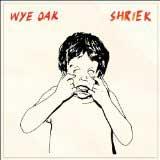 When it comes to the feel of Wye Oak's latest album, Shriek can seem like an odd name. It could perhaps be used to describe the reaction of Wye Oak fans when they learned that the duo of Jenn Wasner and Andy Stack would be tossing aside their guitars for their fourth studio album. Maybe it's an appropriate representation of how Wasner may have felt when she became bored with her six-string sidekick. Either way, Shriek feels more like a screech than it does a warm, dreamy coo over the course of ten tracks. Opening track "Before" sets the new phase of Wye Oak into motion, bouncing along as Wasner switches to the bass and the Stack's double duty on synths and drums. While Shriek lacks that same emotional kick that Wasner could provide with the guitar flurries and squalls of songs past, Wye Oak's fourth album offers up a promising future for the duo.