by Hannah McDonald
View ProfileLinkedInRSS Feed
November 6, 2019 at 10:00 AM 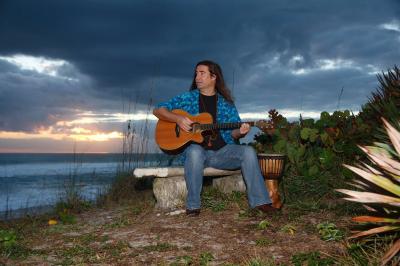 Musician Wynne Paris will stop by Plasha Yoga Studio on Nov. 8, inviting all to join in the therapeutic practice of group chanting.

Plasha Yoga invites Wynne Paris, a 55-year-old musician who has been writing and performing his own original music for nearly 30 years, to soothe and enthuse guests with chanting and song. After beginning a rock guitar career in the 1980s, Paris took an interest in Indian and world music during the '90's, Since then, he has released multiple albums — the most recent of which is Kirtana America (2009) — with a focus on yoga music, sacred sounds, vibrations and chanting. He has collaborated with artists like Rusted Root's Jim Donavan, Mark Karan (RatDog, The Other Ones), and Mike D of the Beastie Boys.

Chanting has been used in spiritual and secular practices around the world for thousands of years. Think sporting events with crowds cheering, or political rallies where everyone is chanting the same thing. The feeling that attendees of events like this get from being a part of the group actions and voice is called collective effervescence — a phrase coined by French sociologist Èmile Durkheim to explain the collective energy created in these situations.

Embracing the effects of chanting practices, Paris has been traveling the world to create music which blends components from genres such as world music, rock, and meditation music. He is the co-producer of the Lovelight Yoga & Arts Festival, in which Erie yogi Michael Plasha has taught in past years.

"Everyone can do it, that's what I love about it. Even someone who is tone deaf can chant," Plasha said. "I just tell them to chant quietly from their heart," he continued, laughing, "but that's what matters."

"There's more to yoga than postures," said Plasha. Kirtan, or chanting, is one of the many parts along with meditation of different kinds. For a practice such as this, Plasha said a mat is not necessary. "Just bring beautiful open hearts and a sense of curiosity and discovery."

"I believe it is a way to connect to love," Plasha said. "When (participants) leave (the studio), they'll leave in a different space than they came, and they can take it into the community."

There will be floor and chair seating available at the event so the space is accessible and comfortable for everyone. — Hannah McDonald