Heel Heat Productions brings bands from all walks of the genre to Erie. 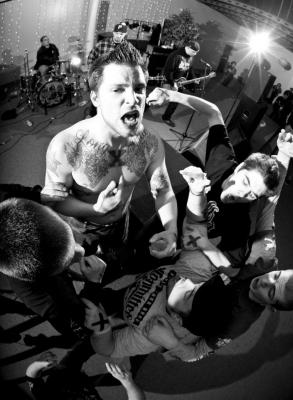 Heel Heat Productions is hosting another hardcore show at Basement Transmissions, bringing bands from all walks of the genre to Erie.

One of the heaviest and fastest growing bands in the beatdown scene, Drowning are making their first trip to Erie from their home in Chicago. Having played in Cleveland numerous times and gained a following, the band is looking to extend their reach to the east.

While exciting things are happening for Drowning, the main excitement of the evening is Erie Straight Edge hardcore legends, xRepresentx, celebrating their 15 year anniversary — a feat of longevity not attained by many bands of their genre.

"When I came up with the vision for xRepresentx, I never thought it was going to pan out into something that would last almost half of my life," says vocalist Derek Ski. "But, when you have a group of people who enjoy playing and spreading the ideals, it makes the band rewarding to the point that not playing in it wouldn't make sense. Though we have had an exorbitant amount of members, each had a place in making xRepresentx what it is today, despite whatever caused them to move on. It's been a wild ride, and I don't see a reason to not have fun with it more."

xRepresentx have been a staple of Erie hardcore since 2003, and are the last living relic of what many would consider the glory days of the local scene. While members of older bands have formed new ones, xRepresentx has remained constant, and their reach has extended far beyond Erie. Type their name into YouTube and you're likely to come across bands as far away as Indonesia covering their songs.

"As for the scene, in Erie and all over, it's changed a lot," Ski comments on the state of hardcore. "But hardcore was always a revolving door type place, where kids would come and show up for 5 months then disappear, and some would stick around permanently. Straight Edge doesn't have the limelight like it did a decade ago, but even that has its peaks and valleys. I'd like to think that we had an overall positive effect on inviting people into the scene, and introducing hardcore and straight edge over the years. And we are going to keep doing it. As long as someone books us and a few people will come out, why not?"