You Don't Need to Leave Town to See Great Art 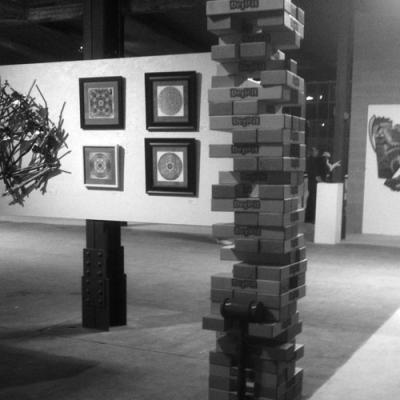 I've said it before and I'll say it again: If you want to look at great art, no city in America beats Erie, Pennsylvania.

"Surely Pen, you don't mean THE New York, as in the City That Never Sleeps, Cultural Capital of the World" doubters ask incredulously. Yes, I do. You can't find better painters, sculptors, or photographers in any of those places than you can find right here. And I have proof: drool-inducing, jaw-dropping, eye-boggling proof.

That proof is at Lovell Place right now. The Northwestern Pennsylvania Artists Association is hosting its Biennial exhibition for the next two weeks and any doubters need to get downtown to see it.

Enter Lovell Place from the eastside door off 13th Street and make your way up the stairs.  Travel down a short cramped hallway and elevator bay on the second floor. Cross the threshold into the gallery area – there is a low overhanging ceiling where several small, subtle paintings and sculptures await you; don't forget them, as you will want to come back to them later. But for now, look left. Here, the room opens up into a grand lofty industrial space with bare steel beams rimmed by strip windows, which add changing light to walls throughout the day.

Two months ago, this space was a lonely and empty warehouse. It has been transformed into perhaps the best gallery space Erie has ever seen: Thousands of square feet of wonders for you to explore.

Even with more than 100 mostly large pieces hung throughout the room, none of the art is crowded. There is room for the art to breathe. Each individual painting, drawing or sculpture is far enough away from its neighbors that it can be enjoyed without distractions. Small works do not get overwhelmed by some of the more monumental canvases, making this the perfect place to show the disparate variety of work that a divergent group like the NPAA inevitably provides.

Kris Risto spent untold hours bolting up panels, making sure there was proper lighting both when the daylight illuminated the walls and after the sun sets, grouping paintings by subject, or tone, or theme. He had help from several people who could probably hang a professional show in their sleep: Tom Ferraro, Michael Tkach, Rob Weber, and Vance Lupher (who hangs shows for the Erie Art Museum) to name a few.

What do you get when world-class artists provide art for a perfect exhibition space? You get what the Spring Show could have been. This is the show of the year.  It is always worth waiting two years for NPAA's Biennial, but this one really showcases the members' craftsmanship and creativity. And there is art in the show that everyone will enjoy.

Since Kris spent so much energy putting this show on, it's only fitting that his is one of the larger and predominant pieces that you notice when you first enter the hall. The imposing canvas pulls you into the deep space within from outside the painting itself, since the bottom of the canvas literally spills out into a sculptural spiral of flat stones on the floor which ends in  vortex that breaks that plane and provides the illusion of pulling you down .

From there you can see a fascinating triptych by David Pratte full of intense patterns that are arranged in a seemingly non-objective arrangement. I'm not going to give it away, but the composition will resolve itself into a surprising picture if you spend enough time with it (or someone gives you a hint, like they did for me). This picture was going to get my vote for my favorite in the show until I changed my mind as soon as darkness fell.

What happened when the sun went down was that Thomas Ferarro's mural-sized canvas, "New Development" transformed into a second painting. I had liked the composition of it, with its huge sky and distant, western landscape perspective when I had studied it earlier, but had wondered at the weird placement of the canvas over a brightly lit window. Tom loves to play with transparency in his paintings, but this one didn't seem to need the backlighting. When I came back around the gallery a couple hours later it was apparent what he had done: His sky in the painting had been designed specifically for the window upon which it was placed. The glowing summer gold of the firmament above his town had turned into an ominous black tempest worthy of its own weather channel special.

The impressively theatrical lighting change on Tom's canvas never diminished the  quality of the rest of the show. There is a wall filled with the most beautiful painterly landscapes and florals by mature masters of their craft. Landscapes by Wilda Sundberg, Mary Miller, Mary Kay Geary, Mary Hamilton, and Toni Kelly always fill me with wonder. The way they handle paint and pastels is so practiced and precise, they make it look easy. Of course, when I try to get the same effects in my own studio frustration ultimately results. And they just keep getting better. Vicki Norvasia, in particular, seems to be coming into her own. The use of color in her watercolor, "First Day" could make the decor of any room.

When great artists grow and try new things, the results are always rewarding and often surprising. It is risky to try new things when you are a professional who is known for a certain style or subject matter, but the results of these experiments here are nothing but dazzling. Bob Hagle, known for his commercial camera work, does some things to the lighting on local barns that will make you rethink the word "atmospheric." Tina Faulkner's playful collages and bright landscapes still tell stories like her illustrations, but in a more complex and subtle way. Debbie Sementelli's "Ethnic Threads of Erie" uses photo transfers to take the tradition of a collaborative quilt to a new level.

But the most surprising and delightful surprise in the whole show was from the most consistent and long-standing artist in Erie: The Grand Old Man of Painting, Vitus Kaiser. Vitus has done spectacularly lit landscapes with studied and realistic detail for decades; the watercolor painting he has in this show is not dissimilar to his previous work if you use that description alone. But oh my, is it ever different in other ways. It glows in places the sun would never think to make it glow. Trees seem to disengage from the earth. An unidentifiable creation that resembles a disinterred root ball floats above a purple and orange… swamp? field? ocean?

Why did Vitus decide to go surreal? My theory is that he is starting to feel his mortality. He has slowed way down the last few years, working very hard, but creating just a few paintings each year. He has pictures inside his mind that need to be expressed before he can't paint anymore. Vitus will leave it to the up-and-coming realists to paint the world around them. He's going to spend the next years giving us spectacular visions that we would never see otherwise. Let's all hope we get to experience many more of these visions, because this one is wondrous.

On the way out of this perfect gallery space, don't forget to check out the missed pieces on the way in. The show is so vast that something had to have been skipped over.  And if a small part of this show is missed, something worthy of one of the greatest art towns in America is missed. And if you have the money and the wall space, buy something, because the one thing we don't have in Erie that they do have in New York, is patrons. Without someone supporting these artists, they won't be able to stay here.

And then you will have to go elsewhere to find great art.

Lovell Place is located at 153 E. 13th St. The NPAA Biennial Show's hours are: Thursday though Saturday noon to 5 p.m., and the exhibition's last day is Oct. 25

by Rachel Harris-Huffman2/12/2020, 12:45 PM
How a Teotihuacan woman's skull traveled from the Valley of Mexico to Erie, PA and back again