You Ought to Know: Bryan Schwab

When Buddy Guy played Erie a year ago, he invited guitar phenom Bryan Schwab, then 13, to the stage to jam with him. 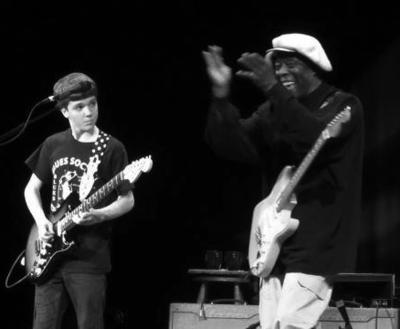 In some ways, Bryan Schwab is your average 14-year old kid. He likes going to the YMCA to play basketball with friends, enjoys learning about the Civil War in his social studies class, and looks to get his schoolwork done as quickly as possible so that he can go do other things.

In other ways, Bryan Schwab is not like your average 14-year old kid at all. He prefers listening to Jimi Hendrix and Stevie Ray Vaughan, he hasn't heard of Justin Bieber, he's met B.B. King and Kenny Wayne Shepherd, and he's shared the stage most notably with Buddy Guy.

Unlike most other 14-year olds, Bryan Schwab holds the future of the blues in his hands.

When people speak of the blues, they talk in terms of generations. Tales abound of the gods and demigods of blues; they're passed down in a history not studied in the classroom but learned through feeling and experience. Those experiences—getting to know the history not just by playing the songs but getting inside of them to make them your own, as well as sharing an experience on stage with those who traveled to the Crossroads before you—separates the wheat from the chaff, the average from the stellar.

Little over a year ago, living blues legend Buddy Guy rolled through Erie. He took the stage in front of a sold-out crowd at the Mary D'Angelo Performing Arts Center, and midway through the show, he graciously offered space on the stage to a special guest.

Earlier before the show, a then 13-year-old Bryan Schwab and his dad stood in line at Buddy's merchandise stand, guitar in hand, humbly just hoping for an autograph. The guy working the booth struck up conversation and asked if the Oil City native had a YouTube channel, any recordings of him play. After seeing the video, the man left, telling them he wanted to show some people backstage the video. After waiting for a while, Bryan and his dad assumed he wasn't coming back so they just sat down, waiting for the concert and possibly that autograph. Minutes later, the man returns with a simple direction: grab the guitar and get ready; Buddy Guy wants to meet you, and he wants you to play with him.

"He came running in and told us to get our guitar," says the soft-spoken 14 year old.

"Your guitar," his dad says, chuckling.

"We went backstage, and [Buddy] signed it for me, and he said he wants me to play on stage," the lanky teen adds. "I was really excited but scared at the same time."

He pauses, picks a few notes on the SRV Signature Strat he's cradling during the entire interview. "I don't know—it felt like I was on top of the world or something."

As we sit in the Schwabs' basement, Bryan's practice space, with walls adorned with concert posters and pictures of his idols, guitars and equipment spread throughout, there's an awkwardness, a nervous shyness that belies the true talent of this not-so-average teenager.

"I find it hard to talk," he admits, after plucking out some notes, "but playing is a lot easier to do in front of people." Bryan never stops playing during the interview—moving from riff to riff, as if it brings clarity, helping him find answers as his hands search the fret board.

When I ask him what was going through his head when he was playing with Buddy Guy, he finishes out a bluesy lick and says he wasn't really sure. Were you thinking out the song, I ask, thinking what you were going to play next.  "It's just something I feel most of the time," he says.

Sure, Buddy Guy's known as a nice guy, but a nice guy doesn't just trot out some junior bluesman wannabe as a random act of kindness. When you watch the video, you see Buddy's ear-to-ear grin shift back and forth to an intense duckface ohh that captures his wonderment that might just be summed up as: damn, this kid is good.

About a third of the way through, Buddy asks Bryan a question.

"He asked me if I had one of these," Bryan says, pointing to his wah pedal, "and I said 'yeah' so he told the guy to go get one."

A stagehand grabs a pedal and sets it up. Buddy gives a simple "you have to stomp on it" direction, and then Bryan lays into the guitar again, leaving Buddy with his face buried in his hands out of amazement.

Later Buddy gives another simple direction: "You get it…" and then uses some colorful language not exactly suited for a bashful 13 year old. Bryan does get it, laying into the guitar and pedal, blending the sounds in an explosion of the blues speaking out from his guitar and his footwork, resulting in praise from Buddy and the audience.

Earlier in the guest spot, Buddy says to Bryan if this is him nervous, he'd hate to see him when he's not nervous. "The thing about Buddy is when he was young," Bryan Sr., adds, "he was nervous, and now he's one of the best showman. He's charismatic."

Bryan started playing when he was just 11 years old. Like many kids, he decided one Christmas that he'd like a musical instrument for a gift. He received an acoustic guitar. But as Bryan's dad points out, his attraction to guitar started before that.

"He started doing Guitar Hero and then decided he wanted to play for real," he says. "He'd memorized [the songs on the game]. He'd go outside and turn his back and hear it and play it. I thought, 'hmm, might be something here, maybe some carryover effect.'"

Not long after getting the acoustic guitar, Bryan got a Fender Telecaster. But then came the Stratocasters—the type of guitar Bryan favors because of its distinctive sound and a notable hallmark in the world of blues guitarists. He says he even hopes to build his own Strat in the near future.

Bryan's parents, supportive and encouraging, stand proudly behind him and play a critical role tin his development—after all, it was his dad who was first listening to an SRV song that spoke to Bryan, helping him realize he wanted to play guitar like that.

"They're all very talented guitar players— their music has been around for years and years," his mom, Julie, says of Bryan's idols. "This genre is not something that's going to go away. I'd rather have him interested in those types of players that have real talent than bands that come and go. I think it gives him an edge to the music world being associated with that kind of genre because not a whole lot of kids are. Not a whole lot of kids know that. If he plays with anybody, it's someone older."

With age, comes wisdom and experience, and despite Bryan's youth, there's no wall between these musicians since they're speaking the same language: guitar; and in a way, they're passing on the history and story of the blues to the next generation.

Currently Bryan studies under the tutelage of Max Schang—another Oil City guitarist. They're working on different modes—getting inside the music—and exploring other genres to broaden his exposure. But one thing's clear, they keep coming back to the blues.

With 3 years of playing under his belt, Bryan's added vocal lessons from voice coach Jeff Brown to help him further develop his stage presence. While Bryan practices singing by singing along with a keyboard, moving from note to note, he says he doesn't learn songs on guitar that way.

"If you play it the same way enough times, you can get sick of it," he says. "With improving, you can do whatever you want. You don't have to follow it note for note."

Aside from continually adding to his repertoire of classics, he's composing original material and has the music to about five songs. But talking about his process doesn't come easy. "I just pick a key and come up with something," he explains before giving a better answer by just showing me. The song he plays has a KWS influence and is catchy and soulful—clearly not something he just came up with 5 minutes ago after noodling around.

Since Oil City isn't exactly a Mecca for blues musicians, Bryan's currently on his own, although he gigs with his teacher from time to time and joins others on stage. Mainly though, he's invited out on the road to play larger cities—Cleveland, Pittsburgh, New York City have all been on the bill already.

The teenager can't play out at bars—meaning he's not able to meet fellow musicians there—so he makes connections through the Youth Art Forum, spearheaded by Barry Salottolo. There, Bryan's part of Youth Keeping the Blues Alive, a group that networks using Facebook. Musicians post videos, where they'll be playing next, and swap stories of meeting their idols.

When it comes to the future—the five-year plan—Bryan answers like many 14 year olds: he's not sure. He simply answers in one word: play.

His parents say they will support him if he decides he wants to turn his talent into a profession, but both—both being teachers—stress that education comes first, and Bryan agrees.

"I think slowly over time, I will," he says of developing that presence, pausing to play, gathering his thoughts, as he stares down at his guitar. "I hope," he adds before going back to playing.