You Ought to Know: Fran Schanz

The Erie art scene wouldn't be what it is without this man. And you should know him and his story. 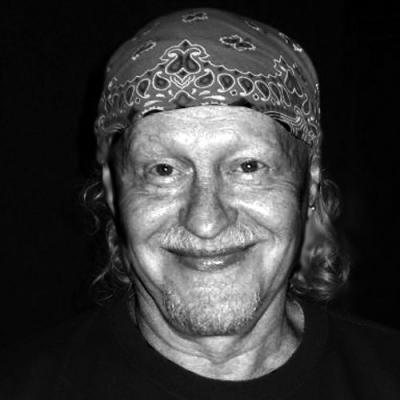 It is a cold day in 1978. Edinboro graduate student Fran Schanz is up to his hips in murky water dragging a goose decoy behind him and looking for Santa Claus. He's pretty good at walking through swamps since his tour in Vietnam, but he is still picking his way carefully, using the vegetation as clues to tell him where to step.  Drowning right now would put a certain edge into this particular piece of performance art, but the people watching with binoculars from the nearby hill would not get the message Fran is trying to convey about man's impact on the natural environment.

There is an island of drier ground near the center of the swamp. Santa greets Fran at the base of a telephone pole. They embrace. As Fran makes his way back to safety, he strews poster paint onto the surface of the water to temporarily streak it with a blanket of multiple hues. It will be one of many canvases he will paint in the years to come.

It is a beautiful summer evening 2013 at 1505 State St. in downtown Erie. Mark Tanenbaum is hosting Ode to Fran the Art Man at the PACA performance space. The room is packed. Erie's entire art community has shown up, many of whom have hung their own art on the walls as a tribute to the guest of honor. There are paintings that look similar to Fran's swirling, brightly-colored organic acrylics. There are portraits of Fran. There are collages and assemblages on every wall.  Everyone is talking about what an inspirational leader Fran has been all these years to area artists. Beer is starting to run low.  When it runs out, the party will follow Fran wherever he wants to go.

It is 2004. Fran and Shirley Schanz walk down a beach on Erie's shoreline. Fran picks up the pieces of the black rubber that are ubiquitous here since a careless employee of Lord Corporation poured a dump truck load of them into the lake. Fran the Art Man has a plan. He will make creatures out of this litter. He will give them the scientific name Genus Junkus and make them part of an installation sculpture called Catch/Release.

Fran has been repurposing the detritus of America into new and fantastic uses since he first learned to draw as a small boy. Too sick to attend school at age eight, he spent many days with nothing to do. His mother brought him huge billboard paper that was blank on the back, and he spent hours upon hours on his hands and knees filling them with doodles.

Since those days, it is has not been uncommon to find a short, trim man in jeans and a workshirt or tie-dyed T-shirt in alleys beside stores or searching near railroad tracks behind manufacturing companies looking for just the perfectly shaped grill cover, or cracked satellite dish, or a discarded pile of mahogany wood from which to make art. In his hands, an old fur coat, a bag of sand, and a neon sign can become a giant glowing tarantula so lifelike that patrons become afraid to enter the gallery where it resides. He has an affinity towards glass eyes, multi-colored dryer lint, and bowling balls – several of which he mounted two stories up on the side of a brick building in a gravity-defying display. He will glue canvases for painting onto desk-tops or paint directly onto the canvas of army medic stretchers. "The material has meaning," he says, explaining his philosophy. "Everything has meaning."

It is 1970. One of Fran Schanz's early works is donated to the Erie County Library so that it can be checked out and hung in the homes of patrons for a couple weeks. Several years later it disappears. This is a thorn in Fran's side. His tired eyes blaze when he talks about the missing artwork.

Is it in someone's home? Is it secretly in a vault somewhere? Was it sold?

At first, he is hard to read. A person who does not know him well may think him ornery and opinionated, but really he is just earnest and forthright. "Cantankerous" has been suggested. Fran's response is, "You've gotta be kidding me. Cantankerous? Just because I'm right?"   It's his pugnacious spirit that is at the heart of the long-term success of the Northwestern Pennsylvania Artists Association, a group of professional artists who fight to make sure that art is given its rightful place in our communities. He is a tireless advocate for artists as professionals. If someone undervalues talent, Fran will be the first and loudest arts proponent to give them a dressing-down.

And he's easy to get fired up. Bring up politics, art museums, the plight of the poor, music, money... he won't hold back his opinion. He'll also let you have yours. If Fran believes in anything, it's freedom of thought. Disagreements and commiseration with friends is his lifeblood. Find him at a gallery opening and he will be surrounded by friends and admirers. He always seems to be laughing, always joking, always with beautiful women – he's always at the heart of any gathering.

It's October 2013. Fran is about to lose the gallery space he has occupied since 1983. He has friends who may be able to help him store all the decades worth of boxed-up installation pieces, piles of lumber, unidentifiable steel industrial parts, boxes of puzzle pieces, and holographic baseball cards he has tucked away in the back... but no one has officially offered space for his materials. It's up in the air. He really has no idea where his life's work will go. But he doesn't appear too worried. He sips an IPA, kicks back, and contemplates. "I never liked beers with bite," he says with his signature raspy chuckle. "I was always a stout person until Southern Tier showed me the way."

This unflappability comes straight from his philosophy of art – since for Fran, art is life. Fran claims he can "make serious art out of anything," and all evidence shows that to be fact. Fran has been making serious art from every experience and item that has come his way since he was small. From being drafted to Vietnam and coming home wounded, to the death of friends, to financial hardships: the hard knocks he's taken in the past have always been the source of immense creative output. There's no doubt that whatever materials life provides him with in the future, wondrous and fantastic things will ensue.

Interested in seeing The Art Man's work? Come visit: Fran Schanz : Select Drawings, which runs through Dec. 2 at the Urraro Gallery at 135 W. 14 St. Gallery hours are: 10 a.m. to 6 p.m. Tuesdays through Fridays and noon to 5 p.m .Mondays and Saturdays.

Bryan Toy can be contacted at bToy@ErieReader.com.