You Ought to Know: Kathy Schreckengost

Pedaling an average of 80 miles a day, six days a week, for more than two months. She?ll cross at least three mountain ranges -- the Cascades, Rockies, and Appalachians -- climbing 8,000 feet on one particularly difficult leg in Wyoming.

by Jay Stevens
View ProfileFacebookTwitterGoogle+RSS Feed
May 30, 2012 at 9:47 AM 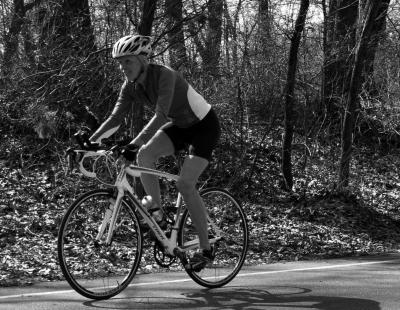 The first thing you notice about Kathy Schreckengost is her eyes. They're electric blue, banded by an almost cerulean ring, and set in a face tinged both by sadness and humor. They imply certain characteristics. Single-mindedness. Strength. Self-awareness. In short, they're the kind of eyes you might expect to find on someone about to set off on a 4,250-mile bicycle trip.

On June 16, Schreckengost will set her tire in the Pacific Ocean at Everett, Wash., and begin a 9-week bicycle trip across the United States. On August 18, she'll dip her tire in water again, this time at Gloucester, Mass., and into the Atlantic. That's pedaling an average of 80 miles a day, six days a week, for more than two months. She'll cross at least three mountain ranges -- the Cascades, Rockies, and Appalachians -- climbing 8,000 feet on one particularly difficult leg in Wyoming.

"That's a mile and half uphill," she says, illustrating it for me. "Straight."

And it's not just a bike ride. Schreckengost has turned her trip into a fundraising drive for a number of charities, one for each week of the trip.

Not bad. Not bad for anybody, really, but especially impressive considering Schreckengost is 63, an age when other people are struggling with stairs, not mountains. And even more impressive when you consider Schreckengost didn't get interested in endurance sports until she was in her 40s. And more impressive still when you consider she was diagnosed with arthritis at 39, the disorder attacking a joint for each year she'd lived up to that point.

That's why one of the beneficiaries of Schreckengost's ride is the Arthritis Foundation, a nonprofit health organization dedicated to improving the quality of life of those -- like Schreckengost herself -- who suffer from the disorder.

In fact, like the Arthritis Foundation, all of the charities Schreckengost chose to raise funds for on her ride relate in no small way to her own life's experiences. That's why she's calling it, "The Ride of My Life."

There's the Barber Institute, where she's employed as a pediatric physical therapist, treating infants and toddlers for developmental issues. And the Autism Society, which helps sponsor the Barber Center's "Ready, Set, Ride!" bike camp, which teaches children with special needs how to ride without training wheels. There's also the Leukemia and Lymphoma Society in honor of her younger sister, Suzie, who died of the disease at age 4. And the Kanzius Cancer Research Foundation in honor of her mother, who has survived two bouts of breast cancer and one of skin cancer, and who'll turn 92 during her daughter's trip.

"She's just a trooper," said Schreckengost. "I bought her a tricycle for her birthday. I took it up [to Buffalo, where her mother lives] last weekend." Schreckengost's mother rode bikes until she was 90, when she said a two-wheeler was too unstable for her.

"We're actually coming through there for the trip," says Schreckengost, "the week after her birthday. We're coming through Niagara Falls, so I'll probably ride with her a little that weekend as part of my ride across the country."

And then there's the National Alopecia Areata Foundation. Because, atop the blade-thin body of the endurance athlete, she wears a colorful knit cap covering a bald head. Most people assume Schreckengost is going through chemo -- I did -- but she's enduring a condition called Alopecia areata, an autoimmune response to her own hair follicles.

"I had it for 25 years," she says, "and when I first got a little bald spot, I thought I was going to go bald, and I didn't." Not until two years ago, when she lost all the hair on her head and body. "It was pretty traumatic," Schreckengost says, "because I didn't think it was going to happen. I thought it was going to be like it had been for the 20 years.

"Once it happened, and it was all gone, it was like there was no return. The trauma was over."

Indeed, if you look for signs that Schreckengost is bothered by her hair loss, you won't find much other than a kind of wistful humor. She relates to me a story about a child who she taught skiing to through the Wilderness Lodge in Wattsburg, who saw her with a wig on at a concert. "She's like, 'you have hair!,' and I said, 'yes, I do today.' I don't know if they think I just get it to magically appear, or what."

In short, Schreckengost has been handed what some people might consider a raw deal. The arthritis, the hair loss, the losses in her family. Many folks handed such a raw deal might just plod on, feeling sorry for themselves. Schreckengost started bike racing, something her son was interested in, too. Which led her to the Highmark Quad Games -- Erie's four-season fitness race -- where she started running, swimming, and cross-country skiing.

Her interest in these sports coincided with her going back to school, which limited her time and flexibility for exercise, especially as a mother of five. "I didn't have to meet someone at a tennis court or do anything organized," she explains. "I could get in a half hour run and get a workout." It started out as a convenient way to stay in shape on her own time, but soon she began to enjoy the sports. So much so, that for her 50th birthday, she ran a marathon.

"It was just incredible," Schreckengost relates of the race. "I raised money for leukemia [in honor of her sister]; I got about 20 miles into the race, and I just kind of melted physically, but it was like joy, and I was just overpowered."

So it's not altogether difficult to see Schreckengost's trajectory, her training and interests leading to a cross-country trek on a bike.

"I thought of it 10 years ago," says Schreckengost of the upcoming ride, "and it seemed kind of intimidating." She found a touring company -- Cycle America -- that offered week-long trips at National Parks and thought that might be doable. Her friends sounded excited about going, too. So she signed up for a trip to the Grand Canyon. "Nobody else signed up for it except me," says Schreckengost, "I was the only one that was going to go.

That first night, she camped on the north rim of the canyon, right next to the trail going to canyon bottom. "I thought I'd died and gone to Heaven," she says. The others on the trip were great fun, and by the end, she had made new friends. No problem. So Schreckengost made five more trips with Cycle America, including one through Glacier National Park and up and over the famously spectacular Going-to-the-Sun-Mountain Road, which snakes up the side of a cliff to Logan Pass, more than 6,000 feet above sea level. On the backside of the pass, she was pelted by ice balls.

That's the kind of experiences Schreckengost will no doubt experience on her trip. She will pedal through storms. She'll have to fight through headwinds. Her body will rebel. She'll experience cramps and soreness and times when her legs feel absolutely flat, like she can't wring even so much as another ounce of energy from her limbs. But she will. Because it's a challenge.

"Seeing the world from the seat of a bike has just been phenominal to me," she says. "You can drive through that same area but you go through on your bike...I love doing that. I love going up a mountain. I mean, it's hard work, the climb. But just there on the top and getting those tremendous views, it's just...." Here, she pauses, searching for a word to describe it. Sitting atop your bike on a mountain pass -- the bare rock walls around you, perhaps snow still lodged in clefts -- looking thousands of feet and miles down on the winding road that brought you here, which looks nothing so much as like a piece of forgotten thread, and knowing you carried yourself here. How do you describe that?

She doesn't. She shrugs and smiles at me, her clear, almost translucent eyes telling me all I need to know.

Jay Stevens can be reached at jay@eriereader.com