You Ought to Know: Laurie Hogan

"Laurie Hogan is the kind of teacher that changes your life," writes Jay Stevens. This is why she's someone you ought to know. 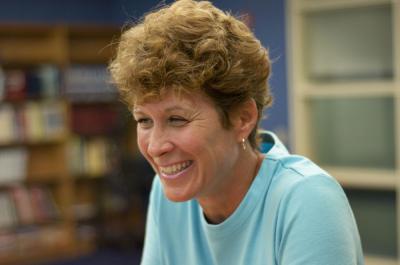 Laurie Hogan is the kind of teacher that changes your life. You've probably had one yourself. Maybe a couple if you were lucky. Our schools are filled with teachers like Hogan, who teach because they love to teach, because they care about children, education, humanity. Because they live for lighting fires under our asses and unleashing us on the world.

This particular life-altering fifth-grade honors teacher at Joanna Connell Elementary is tanned, sports short, stylish hair, gold hoop earrings and piercing blue eyes. When I shake her hand, she's brimming with no-nonsense confidence and an energy that makes her seem like she's taking up a lot more space than she actually occupies. She's charismatic; it's impossible not to listen to her – a skill no doubt honed by demanding the attention of roomfuls of elementary school children six hours a day for the past twenty-five years.

"For the love of children," she says immediately when I ask her why she teaches. "And I love to play. It's an excuse to never grow up. And I loved school when I was a kid."

Her origin story – born and raised in Cincinnati, trained at Xavier University, inspired by her own fourth-grade teacher, Mary Schwartz – seem ancillary to who she is. Her background gave her the opportunity to teach, but her success – her ability to connect with and forever alter her students – comes from someplace else. Maybe from the students themselves.

Let's start with one fifth grader. Let's call him Joshua. He's a touch shy, but his sensitive nature and engaging personality made him a lot of friends: you could even call him popular if you wanted to. He's smart, too, put on the honors track after third grade. But then something goes wrong. A classmate decides to make Josh's life miserable. Not a bully exactly, but the constant sniping wears him down, the friends begin to melt away. And his fourth grade teacher – well, Joshua doesn't do well with strict and impersonal teachers who seem disinterested in his progress. (Who does?) Fourth grade ended with three Fs on his report card. His teacher – right in front of Josh! – tells his parents, there's no way he makes it through fifth grade honors. He can't hack it.

"When I would go into his room in the fourth grade," says Hogan of Josh that year, "he was always so sad. He always almost curled up into a ball, looked like a nervous wreck. And I knew he hated school."

That's the flip side to good teachers, of course. Bad teachers. We've had those, too. Maybe even more of them than the good ones. Hogan herself sees them. "There is so much dead wood lying around," she says, "people who come to the building and collect their pay checks and don't teach. Ever! I say, why are you here? They don't like children, they don't like their curriculum."

Josh's older brother had Mrs. Hogan, and he was a sensitive kid, too. He entered her class struggling and left it a straight-A student, which he's been ever since. Josh's parents figured if anyone could turn Josh around, it was Mrs. Hogan. But when Josh came with his parents to talk with his new teacher before the start of fifth grade, he was nervous. "Like a rabbit," says Hogan. "And both of his parents said, 'I'm so glad you're going to be here,' and I said, 'he's going to be fine.'"

Sure enough, Josh turned things around. "I just let him be himself," says Hogan.

"When he did well, she made a big deal of it," said Josh's father over the telephone. Something his previous teacher did not do.

That's just a hint of the magic. Attending Mrs. Hogan's fifth-grade class is an experience. Literally. Studying colonial America? Be prepared to dress up as an artisan, make your signboard, explain – in character – what you do. Studying science? Prepare for a field trip to Wintergreen Gorge where she'll have you do field sketches and write – maybe some poetry, maybe something informational. Or, for motion and design, build a model roller coaster with help from a GE engineer. Or maybe Mrs. Hogan will trip you up, blow your mind. One day she'll show you the "Wizard of Oz," the next, you'll see "Wicked" – the Broadway musical of the witches' point of view. And maybe that'll be the first time you've ever really thought about the different points of view in a story, debate, incident – only Mrs. Hogan won't just tell you about it, she'll have you live it.

"That completely rocked their world," says Hogan of watching Wicked. "We had discussions about how that goes with today, about stereotypes and prejudice. About being popular. They suck it up like it's oxygen." And her class got to go to Buffalo to see the performance, live.

It's fun, but not easy. "You have got to push them," she says, "they like it. The higher you hold the bar, the higher they jump." So her students read. And they write. And they read some more, and they write some more. "I tell my kids at the beginning of the year," Hogan says, "I will be the hardest teacher you encounter. You cannot just give me that spit-back comprehension kind of stuff, I want you to analyze. I want you to synthesize. I want you to go deeper, because otherwise you don't get it. Multiple choice is not the way the world works."

Tell that to the pinhead MBA types that came up with standardized testing, which would be a great way to grade schools and teachers if kids were faceless automatons and knowledge could be counted like so many beans. Children are not interchangeable cogs fitted on the machine of commerce. They're not here simply to work, make money, and consume. They're people.

Sadly, though, too many teachers teach to the test. "If I were a child sitting in that room," says Hogan of a class that focuses on test preparation, "it would make me hate school. And by the time I get to the test, I've been pre-tested, post-tested, practice-tested, I don't want to do it. I don't care."

Hogan's advice is simple: "If you teach your children well, they can pass anything you put in front of them."

Josh can tell you. He's proof. He can, indeed, hack it. He's brought home honor cards the last three quarters. And he loves school again.

On the phone, Josh's father could talk all night about Mrs. Hogan.

"She has no idea how much she's affected Josh, us," says Josh's father. "She made a genuine difference in two of my children's lives." He could talk all night about Mrs. Hogan. "I don't know how she opened the doors she did," he says, "but I'm thankful she did."

It's a simple philosophy, really. Demand excellence. And care enough to wrest it from them.