You Ought to Know: Lisa Weismann

The woman you think you know is someone you ought to know. 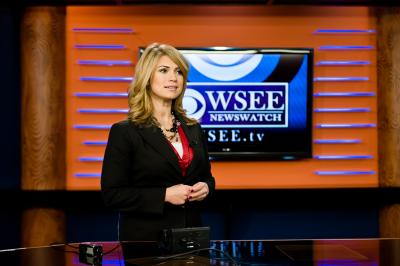 Sure, you think you know Lisa. You see her all the time. She anchors the evening news on WSEE. Each night you invite her into the sacred sanctuary of your family room – that place where the done-with-dinner decompression happens, that workaday winding-down – and with full belly and empty head you look at her, and to her, to fill that empty head with useful news in her usual easy-going, easy-on-the-eyes kind of way. She's practically family.

On television, however, there is always a vast gulf between the person you see and the person you think you see. We tend to subconsciously ascribe traits and characteristics to people we've never met solely based on their highly visible media presence, or the clothes they wear, or the contents of their wallet, or their grande lattes, or their Khakis. Sorry, went a little Palahniuk there. Nevertheless, you tell yourself you know them, these people you've never met; you tell yourself so often that you start to believe it. They're practically family.

"I grew up in Pittsburgh. My dad's job took us a little bit around the country, just the Midwest –   Milwaukee, and Toledo," she says. We're sitting in the wine room at the Erie club, because it was the only one available during a busy weekday lunch rush. It's like a bunker down there, a bunker full of booze. And they're actually playing decent jazz on the radio for a change. "Then we went back to Pittsburgh; I finished my high school years there. I went to Penn State, following in my older sisters' footsteps. They're all accountants, and so is my father, so I'm kind of the odd one."

It must have been tough growing up in such an actuarial-minded household, I thought to myself. But then again, I'm sure it fostered an attention to detail and an investigative zeal that one day would produce a good reporter.

"I majored in print journalism. I wanted to be a newspaper writer from a young age; it was innate in me," she tells me. "I was also very interested in the news and in newspapers, so if you married the two, that was kind of the perfect job for me. "

Print Journalism? Wait, what? Why, that's the most miserable, self-degrading, low-paying job anyone could…Oh, wait…

"I really only knew I wanted to do the TV medium in college. I think in college, I considered TV seriously when I had my public speaking class. Everyone had to take it, and for most people it was so dreaded that they saved it until their senior year. But I really enjoyed it." The way she tells me this makes me believe her. "I liked speaking before a group and conveying my thoughts. I felt I had a knack for it. That's when a fusion occurred – I can write, it's news, it's public speaking, and that's television reporting."

Apparently, that dreaded public speaking class we all had to take was her own personal vin-dit, that small shove that shoves you in the direction you should be shoved.

"I reported and edited for my college paper, but once I took that public speaking class, I found a knack for something else, and I think I found my niche. I love what I do. I love the visible aspect of it, I love the speaking aspect of it, of course I love writing and reporting; I couldn't have a job that didn't allow me to write."

Indeed, Lisa found her niche. Once she left Happy Valley, she landed her first job right here in Erie, and after spending almost two years as a reporter, she moved over to the anchor desk.  "I anchor the evening news here on the CBS affiliate and the CW affiliate; I've been doing that for a little more than two years."

Based on the person I'm seeing from across the large oak table down in the booze bunker, I imagine she enjoys her work, and I think that despite never having watched her do it, that she's probably good at it. She's engaging, intelligent, and a fine practitioner of the lost art of conversation – so fine, in fact, that about halfway through interviewing her, that large oak table down in the booze bunker that divided us suddenly turned 180 degrees. I felt like she was now interviewing me, effortlessly yet deftly diverting the attention away from herself, perhaps showing me more of the person I see than the person I think I see.

"I'm a quiet person. I'm a thoughtful person. I like to take in my surroundings rather than be the source of entertainment," she goes on to say. "And I think that's noticeable from the people I hang out with to what I choose to do in my free time. I mean, I'm on television and I don't even have cable. I'm just a very private person, and that doesn't mesh sometimes with what I do."

I ask her if she's often recognized, out in public. "I think the very first time it happened I called my parents right away and I was excited, but, it's what I do for 8 hours a day, and that's it. It's my 40-hour a week job; it's not me."

Lisa assures me that eventually, this recognition will get old, if it hasn't already. "It used to be a novelty. It's worn off. And I've got it more since jumping to the [anchor] desk; I was a reporter for a few years, so it's definitely out there more."

Although her ascent to anchor leads to greater recognition in public, she tells me that her work does not significantly intrude into her personal life. "I think that because I do a lot of the necessities during off hours, like the gym late at night, the grocery store just as late, there's not a whole lot of people around. And I'm not sure if I do that by choice." Subconsciously, perhaps?

"Yeah, but you just have to be gracious and friendly and plaster a smile on. I value my privacy a lot, and I think that doing what I do, because of that, you value it a lot more," she says, of riding the back of a tiger she can never dismount. "And it's not bad, but you think twice before heading out, whether it's out for the night or even just to the grocery store. You kind of always have to feel 'on' and you have to be friendly and smiling."

Lisa Weismann is a private person with a public persona. The person I see and the person I think I see are becoming two very different persons.

"I'm a big family person. I really value my friends, my family. I'm at the age where I can still put in a lot of hours at work," she says, hinting at her ideal future. "I think my priorities will change when I get married and have kids. I think that's the focus. I think that will be my life when that comes later down the road. I think that's what I want to do, be a mom, probably a stay-at-home mom. Like I said, I had three sisters, and growing up in a semi-large family, four kids, was great, and I think I'd like to probably have that same number, maybe one or two more," she pauses. "Or less. So, that will definitely change, and my life will be less work-focused the older I get. But then again, things always change. What's that saying, 'Want to hear God laugh? Tell him your plans.' But who knows. Like I said, I'm 26, so that could happen in 5 years, 10 years. For now, I'm really concentrating on work."