You Ought to Know: Mr. Joe 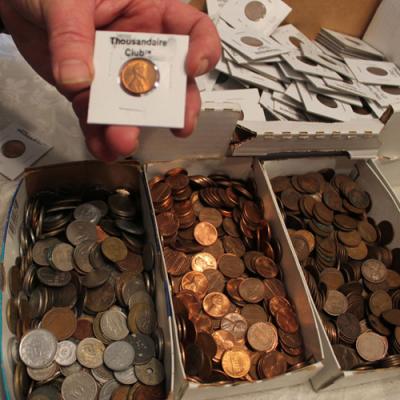 Joe was a guy tough to get a hold of over those holidays.

Once he answered his phone late last week, though, he was good and friendly, and excited to talk, all ready to show me what he's up to with this thing he calls the "Thousandaires' Club."

From what I picked up through him early on, Joe's thing was something like this: A self-made local millionaire who's earned his way, and well, by investing in real estate, public stocks, coins, and other up-valued areas, he goes in to Erie's city and other area schools and centers, and tells kids a few clear, key things about basic money-making and -saving fundamentals; he shows them, and lets them hold, to feel what a stack of some real cash (one thousand one-dollar bills, that is) is like; and then he leaves them, each one, with a small collection of real coinage – some of it worth well over its given face value – along with some other stuff to get going on their way to future wealth. And to have fun doing that. To make a game – the game it really is, he says – of financial planning.

I took the chance to check this out for myself as soon as he offered it.

Nice and patient, Joe, a real fatherly-seeming sort, waited for me as I ran late to his Saturday-morning presentation at the 10th Street YMCA. There, he spent and hour or so telling – then showing – a group of ears-perked city kids a little bit about what, from where he's at, is really all there is to know when it comes to starting to understand what money is, how to work it, and how to save it towards building their lives.

Joe – "Mr. Joe," he went by – did his thing just like he said he would. He shared with the kids that he grew up in a not-too-far-from-here city neighborhood, and that, along with having hard-learned how to make and save money himself, he's known for a good part of his life what being poor – real poor – is all about, too.

When I asked Joe for a quick follow-up as he packed up after that day's presentation – one of the couple he had that week, and one of many that schools' and organizations' administrators have invited him in to give – he gave me an easy invite to come on over to his house (a tasteful, high-ceilinged, comfortable crib, set quietly amid some of Erie's more well-moneyed countryside real estate) for some whole-and-hearty Sunday breakfast and conversation.

This guy, I thought, doesn't seem like he has a thing to hide. That's cool by me. So's breakfast.

Then, Joe went on to tell me – pretty directly too, and not for the only time – that he wants his full name and face to stay out of this Reader feature I'm working on about him. That's important, he said, for a couple of good reasons: First, he's going around to all sorts of places, lots of them public, with stacks of cash and coins and talking about his own personal wealth, and, as open as he is, he's not looking for any trouble to come of it, for him or his family.

Second, he said, and emphasized more repeatedly, what's happening with this Thousandaires' Club – and what You Ought to Know about it – isn't his personal story, back or front.

When it comes down to what it's really all about – identifying some of the biggest root problems tied to poverty, and breaking the cycles that perpetuate it – "it's not about me," he said. "It's about the kids," the ones who were born into poverty, but whose futures are yet to made or broken, the ones who can learn (and unlearn) and who can effect real change.

He feels there's good answers to some of those problems within the rules of his simple money-building program – a "Respect the Penny" concept so basic little kids can, and do, sink their teeth right into it – but when it comes down to it, "I can't do it all by myself," he said.

But for about the last 10 years though, he's been doing just that, heading to those schools and centers to give a stripped-down, one-man, no-bull show, then heading back to his wife and home.

When I was there a few days back, he showed me stacks of thank-you notes and letters from some of the kids he's visited with and presented to over the years, many of whom said they took his simple lesson to heart – and, later, to the bank.

"Mr. Joe's speech about saving money had a huge effect on me," one high-school girl wrote in an essay dated 2011. "He taught us to always pay attention to the smaller things, like saving pennies, if we ever wanted to get to the bigger things."

A lot of other kids said the same sort of things, giving plain credibility to Joe's plain lessons.

The front of one little kid's card, though, just might have nailed down who – and what – this "Mr. Joe," this self-starter, this self-motivator, this man in and of motion, really is: "A NINJA," it read, and showed, in that clear, real, simple, child's-play kind of way.