You Ought to Know: Norman Stark 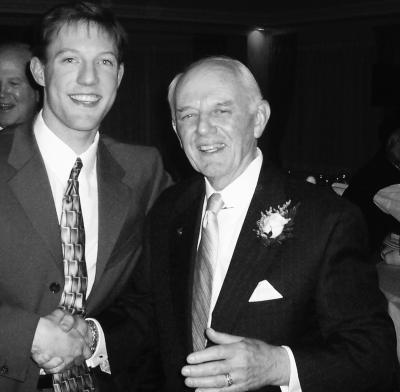 Emerson once said, "What you do speaks so loud that I cannot hear you speak." This quote comes to mind as I sit in the home office of retired attorney Norman Stark and listen to him talk to me about his life. A man of Irish and German descent, Norm was born and raised in Erie; his family originally moved here near the turn of the 19th century. His home is nestled among several statuesque and stunning homes that line the bay. He talks to me from the corner of his office as I relax in his oversized leather chair and stare out the large bay window that overlooks his delicately landscaped yard that also serves as a backdrop to a view of the bay.

As I listen, he tells me of his youth and growing up in and outside Erie, his life-long commitment to helping our community, and about a life-long and trusted friendship he made along his way.

"My family moved into this house back in the early 1970s and have been here ever since," Norm explains. "My wife passed this past summer after a battle with Alzheimer's disease, and my daughter and her children moved into the adjacent home that is connected."

Norm, one of four children, and his wife Marie were both born at St. Vincent's Hospital just two weeks apart – 75 years ago this summer. But they wouldn't meet each other until later.

"We were 14 when we met," Norm says. "I was at Cathedral Prep, and she was a freshman at Villa Maria." And they would be together ever since. "I ended up going to Gannon right out of high school, so I wouldn't lose her," he says with a nostalgic smile. Afterwards, he went to Notre Dame Law School. "At the time I was Captain in the U.S. Army and went into active duty during the Cuban Missile Crisis. I was sent to Albany, N.Y., where I was commanding officer of the Armed Forces Examining Station. This station was responsible for the integration of all the draftees and enlistees for all the different services. During those years, we had three children during law school, another in the army and then another when we moved back home to Erie."

It was at that time that Norm started to get more involved in the community. "I became involved with the United Way early on. Mainly because I was very impressed with all the people that were involved with it – they were selflessly committed to their cause." He was connected with the organization for 28 years and on the board for 25 years where he served as campaign chair and president of the board. It was through this organization he became aware of the Big Brothers Big Sisters of America organization.

"Big Brothers Big Sisters was an agency that received United Way benefits. I was at a meeting one afternoon and a widow had spoken on behalf of the organization," Norm explains. "She had mentioned her husband had passed at the very young age of 41 when she was left with three children to raise. The one really needed a male figure in the home and so she put the child into the program and found it very beneficial to him."

Although Norm would find immediate interest in the program, he wouldn't be able to get involved until a few years later.

"At the time I was engaged otherwise with raising five children and was active in many nonprofits both at the board and ground level, and I just didn't have time for it. However, later, when two of my sons had graduated – one went on to become a certified public accountant and the other to get his law degree – and both of them leaving in one summer, I was reminded of the widow and decided that it was as good a time as any to get involved."

His match turned out to be 11-year-old Christopher "Gus" Carroll, and he lived just a few blocks over from where Norm had been living. "It was an incredible coincidence because he was nearby, and he already had a stable and loving family – he just needed a boost as his father had recently passed."

While many "Bigs" would take their "Littles" – the nicknames given to big brothers/sisters and little brothers/sisters – to movies or other social outings for a first time interaction, Norm found a more personal way to first get to know him. "The first meeting was a bit unusual. Because he was so young I didn't want to take him bowling and if we were to go to a movie we wouldn't be able to talk, so right before we met the first time, I asked him about his family heritage and what he knew about it."

Norm learned that he was an ancestor of the Curtze family, many of which had grown up right by Norm. "The Curtzes were a very prominent family in town and although Gus knew he was related, he didn't know much about them."

So, they took a walk to the Erie Cemetery to visit the various family plots. "We literally walked in heavy wet snow from Third and Lincoln up to the Erie Cemetery on 26th and Cherry. It was during that long walk Norm realized that this relationship would be mutually beneficial – and that he'd be learning new things as well. My sons were wrestlers and rough-housers. Gus knew a lot about architecture, as he would comment on the homes as we walked by. He was fast and very good at roller-skating and ice-skating and at soccer. I learned a ton of new skills by hanging out with him."

Over time, Norm would welcome Gus into his own family. "I would invite him for family events often. Instead of cutting out time to spend with Gus, I made him part of our family. I would just invite him along for different outings. And on some extent I was integrated into his family as well – through birthdays and graduations and such. It made it easy to maintain the friendship."

What is so special and enduring about this friendship is that is still exists – 21 years later. All too often, some big brothers or big sisters eventually grow apart or develop their own friends and family, but Gus and Norm still remain close friends today. While Gus currently lives in Pittsburgh, he spends much of his time in Erie – most recently having spent Thanksgiving with Norm's family.

"When Gus would walk home from our house, I would yell, 'See ya, Gus,' and he would say, 'See ya, Norm,' repeating it to each other until he was close to home. It was my way of knowing he got home safe. When he came home for Thanksgiving, after he left, he drove around the street near the house with his window down as we yelled the same goodbyes we did when he was younger," Norm says, smiling.

"From the time that Norm and I were paired, he's been really involved in my life," Gus tells me when I called to talk to him about Norm. "And he's taught me so many things – not just how to do different things – but values. Values of hard work, of being honest and trustworthy and following through on commitments. He is probably the most ethical person I know – and I don't say that lightly. He is a very loving and caring man – and he dotes on his family. He didn't have to make time for me, but he did. He was literally at everything – eighth-grade soccer games, my high school and college graduations. He spoke at my wedding. He was there when we lost a daughter – and when we had a son. All of this truly speaks volumes to his character."

Before moving to Pittsburgh, Gus did spend a short time in Erie after college, where he did serve on the board of Family Services and served as a spokesperson for BBBS. As for whether he'll ever be a big brother himself…

"I'd like to someday get involved. I recently broached the topic about being a big brother with my 10-year-old son but he really doesn't want to share me," he says with a laugh.

For more than 100 years, Big Brothers Big Sisters has thrived under the belief that inherent in every child is the ability to succeed and prosper in life. Its mission is to provide children facing adversity with strong and enduring, supportive relationships that change the lives of these "littles" for the better, forever. What oftentimes goes overlooked or unrecognized, however, is the positive impact the program has on the "bigs" as well. And this was no different for Norm.

"What I want to stress is that as a big brother, I really had the opportunity to relive my youth and build another friendship. I wasn't just being a volunteer or helping out a charitable organization. I developed a life-long and trusted friendship. It is one of the most valuable and cherished experiences I have ever – and continue to have – today."

Rebecca Styn can be contacted at rStyn@ErieReader.com.