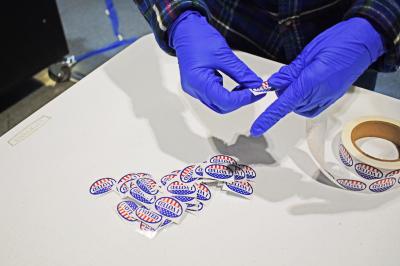 n more ways than not, Erie County, Pennsylvania looks much the same after the 2020 general election. But, the change that did happen has received — and will continue to receive — the national spotlight.

Unless you've been buried beneath rocks or unplugged from glowing screens both large and small, you likely already know that. But let's recap.

Filed under Absolutely-No-Surprises-There: Pennsylvania State Reps. Pat Harkins, Bob Merski, Curt Sonney, and Parke Wentling, representing General Assembly Districts 1, 2, 4, and 17, respectively, are all headed back to the halls of Harrisburg without any headaches on the campaign trail, as they all ran uncontested re-election bids. Along party lines, it's an even split, with Harkins and Merski representing the Democrats and Sonney and Wentling representing Republicans.

Filed under Not-A-Shocker: In the race for the General Assembly 3rd Legislative District, Democratic incumbent Ryan Bizzarro handily defeated his Republican challenger Greg Hayes by 8,236 votes — or, 22,217 to 13,981. Following the election, House Dems in Pa. announced Bizzarro would serve in the leadership capacity of Democratic Policy Chair.

Filed under As-We-Would-Have-Expected: Republican incumbent to the General Assembly 6th Legislative District Brad Roae held off Democratic challenger Matt Ferrence, defeating him 5,412 to 3,463, or a margin of 1,949.

Filed under Most-Local-Eyes-Were-On-This-Race: In the hotly contested race for State Senate District 49, Erie voters elected to send incumbent Dan Laughlin back to Harrisburg for a second term. Of the 116,907 votes cast, Laughlin, a Republican, received 69,813. His Democratic challenger, Julie Slomski, received 46,900.

Most were watching this race, because, with a nightly barrage of TV commercials, a seemingly never-ending-amount-of pop-ups and ads on social platforms, and what seemed to be enough flyers mailed to start a 13-mile-wide bonfire, this race was hard to ignore. While that inundation may have lent to the appearance of the race being close, Laughlin prevailed with a 22,913-vote margin.

Filed under The-Past-Is-The-Present-Again: Democratic challenger for the PA-16 congressional seat Kristy Gnibus notched 68,463 votes to Republican incumbent Mike Kelly's 65,640, putting the Erie County native and political newcomer up by 2,823 votes in her backyard. But Erie alone does not make up PA-16; it includes Crawford, Mercer, and Lawrence counties, and a portion of the incumbent's home county: Butler. Kelly won each of those other counties, totaling 207,472 votes to Gnibus' 142,232.

The increase of votes cast in 2020 compared to 2018 is largely explained by the race at the top of the ticket. The big show. The race to which more Americans — and perhaps the world — pay attention to than anything else: the presidential election.

But before we get to that, let's note: The numbers presented here come from local, state, and national unofficial final counts, which include all legally cast ballots, many more of which were this time cast by mail, Pennsylvania included.

Due to Act 77, the election reform bill signed by Gov. Tom Wolf on Oct. 31, 2019, Pennsylvanians were now able to cast no-excuse mail-in ballots. Plus, the COVID-19 pandemic's impact weighed heavily on voter habits, as many opted not to vote in-person out of an abundance of caution.

This led to, again, something you've likely heard about already but bears repeating: Baseless accusations of voter fraud. That hit home in Erie, as a USPS worker told Project Veritas he allegedly overheard the postmaster general giving directions to backdate ballots received after the state-imposed deadline. Just days later, after an investigation was launched, Richard Hopkins told USPS investigators he had fabricated the account and recanted. But before that, newly re-elected Republican Senator in South Carolina Lindsey Graham gave the story oxygen in the mainstream media. So did others elsewhere, including the 45th President of the United States on Twitter.

So, all the aforementioned races could also be filed under: Things stayed the same. But the one that cannot be is the race between Republican incumbents President Donald Trump and Vice President Mike Pence and their Democratic challengers, former Vice President Joe Biden at the top of the card and California Senator Kamala Harris as his Vice President.

After flipping red for the first time since 1984 during President Ronald Reagan's re-election bid, Erie County — a reliable, traditionally blue county — went to Trump. Many might recall the night it happened, when Pennsylvania was still a toss-up, and upon getting the news that Erie went to Trump, it tipped the state scales to Trump, and Pennsylvania became projected for him. That is, as Erie went red, Pennsylvania followed.

Now, Erie is again getting the spotlight. After Trump edged out Democratic challenger Hillary Clinton in 2016, national correspondents parachuted in, Googled "diners in Erie, PA," sat with folks in booths with cups full of coffee and plates full of eggs, and asked them: So what the heck happened? in an electoral analysis ouroboros.

The national reporters have already been — and will continue to be — back, assumedly asking again: So what the heck happened?

On Election Day, a Tuesday that seemed to last 117 hours, Americans went to bed not knowing the outcome of the election. And, depending where you were looking, Electoral College tallies were different. The similarity, though, was that Biden was ahead of Trump. And, while both were short of the necessary 270 Electoral College votes necessary to be declared the election's winner, Biden had more paths to victory than Trump. Trump would have needed to sweep most of the remaining board, while Biden could've used various combinations of some states.

As Tuesday wore on into Wednesday, then tumbled towards Thursday, and flowed over to Friday, the likelihood of a Biden victory was becoming more apparent. As moderator for Meet The Press Chuck Todd said, in essence, more than a few times: We know the outcome; we just don't know how we're going to get there.

And it was Pennsylvania, tipping Biden over the 270-threshold, while other states remained in play. The coup de gras: No path to victory for Trump did not include the Keystone State, while Biden could have lost Pa. but won the election by picking up other states.

Biden's victory in Erie County marks the slimmest margin dating back to 2000. Second to that comes the only Republican claim to Erie County since 1984 at 1,957.

While unofficial counts are being made official, a process that does take time and is common practice following elections and is not the result of nefarious interference, it is projected that voter turnout in 2020's general election, nationally, will be around 70 percent. The closest our nation came to that in the history of the modern American presidency is the 1960 election between John Kennedy and Richard Nixon at 63 percent.

What does this all add up to?

On the afternoon of Friday, Nov. 13, major outlets took the last two remaining uncalled states off the board: North Carolina went to Trump, and for the first time in 28 years, Georgia went blue, going to Biden. The final Electoral College count from CNN: Biden, 306; Trump, 232.

While the unofficial count still needs to be made official, Joe Biden and Kamala Harris, who has made history as the first woman and first African-American and Asian-American woman elected to vice president, have won both the Electoral College and the popular vote.

The Biden-Harris ticket has received more votes nationally than any other candidate in the history of the United States at 78.8 million.

Likewise, Donald Trump and Mike Pence, with 73.1 million votes, have received more votes than any sitting president and vice president before them.

Like only a few other sitting presidents before him (Hoover in 1932; Ford in 1976; Carter in 1980; H.W. in 1992), Trump becomes just the fifth president in modern American history to lose as an incumbent. Ford remains an outlier, as the nation's only president to have been neither elected to the presidency or vice presidency. National turnout in those elections: 53, 54, 53, and 55, respectively.

For Pennsylvania, it's back to being blue, mirroring the nation with a notable uptick in voter turnout. Yet the margin of victory for Democrats isn't where it had been before losing it in 2016. And the same can be said for Erie.

On voter turnout alone, this election will be called historic. Other reasons include: The incumbent's refusal to concede, despite having lost both the Electoral College and the popular vote, leaving no path to victory, and having no substantiated evidence of voter fraud that's being claimed to have manipulated the election's outcome.

We are living in the interregnum now — the period between the election night and the inauguration, a period historically marked by the peaceful transition of power.

A key feature that has made America itself over the course of this experiment in government has been that peaceful transition. Many point to Washington's channeling of Cincinnatus in not seeking never-ending power despite having it as an option on the table. Others point to Adams conceding to Jefferson and becoming the first president to be ousted after just one four-year term and accepting the results of that election.

Pundits, scholars, pollsters, and voters continue to unfurl speculations of what will unfold between now and Jan. 20, 2021, the date of inauguration. What we do know is that on Dec. 14, electors from all 50 states plus the District of Columbia meet to cast their ballots for president. During the early days of January, the newly elected Congress will meet — first the House, then the Senate for a formal electoral vote count.

These have been nothing more than mere formalities in our country's past. Whether they remain historically so by the time we get there this go-around will be seen in the coming hours, weeks, days, and months.