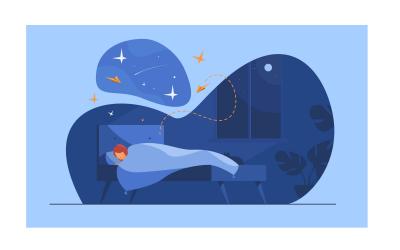 There's an awful lot to lose sleep over these days, from pandemics to forest fires to conspiracy theories beyond count. Even if it's not the latest Mayan calendar transcription error (expect the asteroid in 2021*, not 2012) keeping you up at night, there's still the neighbor's dog and its incessant yapping. Will you shut up, man?!

Erie-based AcousticSheep LLC, in what might be considered oracular fashion, predicted this would happen over a decade ago and thus invented SleepPhones. These soft, wafer-thin-speaker-containing headbands were designed (with zero consultation from extraterrestrial lifeforms) to be comfortably worn to bed, regardless of how you fall asleep — face up, face down, on your side, even hanging upside-down from the rafters of your Transylvanian manor. Through this innovation, they solved a major issue for many folks: How to listen to what best helps them fall asleep.

Despite over a million pairs of SleepPhones sold worldwide, one question remained: What exactly is the best sonic backdrop for supporting healthy sleep patterns? The answer of course is subjective — some people prefer gentle music, others audiobooks, while others prefer the sounds of a still-intact rainforest. Many more just plain don't know, which is why the AcousticSheep Harmony Project mobile app was introduced to help them figure it out.

The mobile app utilizes artificial intelligence to intuitively build the fluffiest pillow of sound each individual user could possibly imagine, with hopes of allowing them to sink into a deep and restful sleep reliably and consistently. Users "rate" sounds according to how relaxing they perceive them to be, and the AI takes over from there, like a savvy matchmaker setting you up with the dreams…of your dreams.

"Over the past year user ratings have helped the system to weed out less desirable genes (sounds), helping the system to create 10 new generations of increasingly effective sleeping soundtracks," explains Andrew Dalton, AcousticSheep PR outreach manager. "As these generations have progressed we have also noticed a significant increase in positive ratings over earlier generations, which clearly indicates evolution within the system."

It's all based on neurological research into something called brainwave entrainment — an attempt to synchronize brainwaves to a specific frequency of sound so as to induce a desired mental state. In regard to wakefulness and sleep, researchers are most interested in the lower-frequency, higher-amplitude theta and delta waves associated with our "twilight" and "out cold" states of consciousness, respectively. Various studies so far have found the following most effective:

The concept of colored noise may seem a little vague, but if you think of it in parallel to visible light, it becomes somewhat easier to understand. White as the eyes perceive it is all hues in the visible spectrum being reflected at the same time; "white noise" as the ears perceive it is all the full spectrum of audible frequencies detectible to humans transmitted at the same strength at the same time. Conversely, black is the absence of color and "black noise" is actually the absolute absence of sound, aka dead silence aka "now all you can hear is your thoughts."

The most agreeable noise colors for most people lie somewhere in between. The one many find the most useful for sleep is "pink noise," which describes a selection of frequencies with more energy toward the low end (more bassy) evocative heavy rains. Others may like "Brown noise" (aka "Brownian noise") which recalls the ocean. These can be layered in whichever way the user finds most pleasing.

Isochronic tones are tones that pulse on and off at regular intervals, creating an even rhythm. Each tone is pitched the same and is only sustained for a brief instant. This might be incorporated as a nice undertone to your soporific sonic stew, giving your subconscious a little something-something to follow all the way down to Sleepy Town.

Monaural and binaural beats both operate on the principle of mental subtraction — your brain automatically calculates and hears the difference between two closely-related (less than 40 Hz apart) pure-tone sine waves (under 1,500 Hz apiece) that are broadcast simultaneously. This can be done through headphones, with each ear getting a different frequency separately (binaural); or it can be done through speakers, with the two tones pre-mixed (monaural). Either way, it has been said to reduce stress and anxiety, although there hasn't been enough research to prove so conclusively.

That's part of the intrigue of the project, according to SleepPhones inventors Dr. Wei Shin Lai and Jason Wolfe. Lai calls it a "genetic system that is constantly evolving," while Wolfe says, "This is only the beginning for us when it comes to AI applied to sound and its physiological effects."

As the data reveals more, they'll unveil more in terms of innovation. For now, though, the goal is the same as it's ever been: helping you let go of your thoughts tonight so you can be in full control tomorrow.

The AcousticSheep Harmony Project app is downloadable for free on both iOS and Android platforms.

A sleep-deprived Matt Swanseger (mswanseger@eriereader.com) could easily fall asleep inside a steel crate dropped in the middle of an active limestone quarry. Nonetheless, he highly recommends Brownian noise and a good pair of headphones for blocking out distractions.