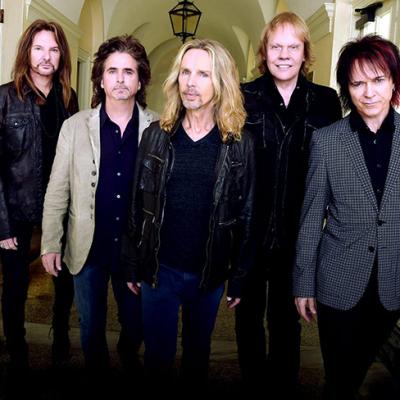 Some myths hold that Greek deities who drank from the River Styx (the "river of hate" separating the lands of living and dead) would lose their voices for nine years, just in time to bemoan (or cheer) an additional nine years of Olympian-council ineligibility. Others maintain that immersion in the Styx could render one virtually invulnerable – except, perhaps, for a certain Achilles' heel (Hades, the watershed for the original cosmic joke).

The river's namesake band could not be more aptly titled. Artsy prog-rockers who gradually acquired a flair for arena bombast, they occupied the pantheon of rock gods by the late '70s and early '80s. Guitarist/co-lead vocalist Tommy Shaw's incorporation into the band ushered in a string of four (!) triple-platinum albums: The Grand Illusion (1977), Pieces of Eight (1978), Cornerstone (1979), and Paradise Theater (1981). Styx was a classic example of a band fans loved to love and critics loved to hate – success deflected derision, however. It seemed as though the group had bathed in an enchanted river, granting them powers beyond mortal comprehension.

Infighting quickly became the band's Achilles' heel, and after 1983's far-flung rock opera Kilroy Was Here (which nonetheless bred the timeless "Mr. Roboto"), the band lost its voice – or rather, voices. Founding member and keyboardist Dennis DeYoung was convinced that the band's theatrical-pop direction was the proper course, while Shaw argued that the hard-edged arena rock of (his) songs like "Renegade" and "Blue Collar Man" had propelled them to the top. The two personalities went their separate ways and did not reunite on a semi-permanent basis until 1996. Renewed friction and DeYoung's increasing sensitivity to light (problematic for an arena rock band with a flashy light show) soon forced him out of the band for good.

The current lineup consists of Shaw, Todd Sucherman (drums and percussion), Lawrence Gowan (vocals and keyboards), Ricky Phillips (bass, guitar, vocals), and original members James "JY" Young (vocals, guitar) and Chuck Panozzo (bass, vocals – when possible). They come to Erie having averaged over 100 shows a year for the past two decades – refuting the notion that no souls who enter the Kingdom of the Dead may leave.

Too much time on your hands Wednesday evening? Nothing to do but all night to do it? Set an open course for the Warner Theatre and come sail away, come sail away for $48.50. – Matt Swanseger