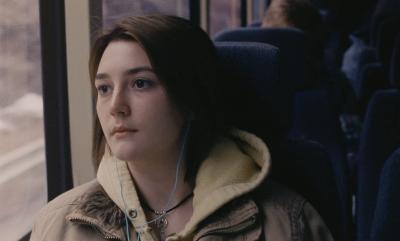 There is a scene early in Eliza Hittman's (It Felt Like Love, Beach Rats) new film Never Rarely Sometimes Always where the main character pierces her nose. Though unspoken, it is obvious that her parents wouldn't let her have a nosering so she does it herself. This tiny gesture sets the stage for the rest of the film where a young woman makes a choice involving her own body in a world where everything seems against her. The result is a beautiful and poignant story and another testament to the vitality of independent film.

Following 17-year old Autumn Callahan (Sidney Flanigan), a girl living in rural Pennsylvania who discovers she is pregnant. Autumn decides she wants to abort, but Pennsylvania law prevents girls under 18 from doing so without parental consent. So she turns to her cousin Skylar (Talia Ryder) to help her get together some money and take a bus to New York City in order to have the procedure.

Hittman's camera work in the film is brilliant, shooting Autumn entirely in tight close-ups that keep us within her headspace throughout her perilous journey. The intimate style makes every setback and new information all the more emotional as we see all the factors (location, money, age) that are against Autumn and Skylar. It also shows us all the painful realities of teenage pregnancy that other films tend to gloss over or romanticize (I'm looking at you, Juno). This is a story that thousands of girls go through every year and to see it all presented onscreen so bluntly but without any judgment is what makes the film so special and relevant. Never Rarely Sometimes Always is currently available for Early Access on Amazon Prime.