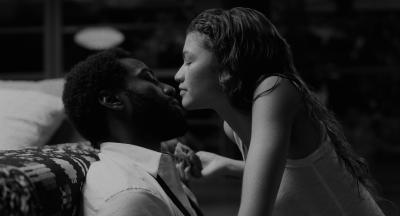 Netflix's  Malcolm and Marie is the epitome of a pandemic project. Filmed in secret with a concentrated cast and crew, director Sam Levison (Euphoria) creates a capsule drama set in a rented house shared by filmmaker Malcolm Elliott (John David Washington) and girlfriend Marie Jones (Zendaya).

After returning home from Elliott's movie premiere, the couple launches themselves into a tense, undeniably toxic nightlong argument. Jones accuses Elliot of not caring for her and is angered that he did not credit her for his work, which her past drug addiction inspired. Elliot counters with criticism over her insecurities and her lack of passion for acting. You know, typical marital disagreements.

Yet perhaps the most notable aspect of the experience is  Malcolm and Marie's self-awareness and critical commentary on Hollywood. Elliot laments over how his debut movie is received by critics and thus, what it means to be perceived as a Black artist making art.

Midway through the movie, a white female film critic applauds Elliot for shedding light on the healthcare system for people of color in his movie. In turn, Elliot is angered at having now been labeled as political in his filmmaking as a Black artist. He argues that not everything he does has to be about his race and therefore does not always have to be political.

"You can't hang everything on identity," Elliot yells. "You can't say that I brilliantly subverted this trope cause I'm Black, but I fell into this one because I'm a f***ing man. Identities are constantly shifting."

Playing on her expertise in grunge and angst from  Euphoria, Zendaya further matures her acting through the complex and troubled Jones. David Washington matches her energy as their chemistry ebbs and flows over the course of an hour and 45 minutes in a sexy grayscale backdrop.

Viewers are forced into each character's individual perspective as Levison allows  Malcolm and Marie to play out in real-time. Each pause, each drawn-out monologue is given realistic breadth, offering viewers a nocturnal glance at what is either a beautifully passionate or tantalizingly harmful love. — Hannah Wyman