Stress-proof yourself and stretch your resolutions further 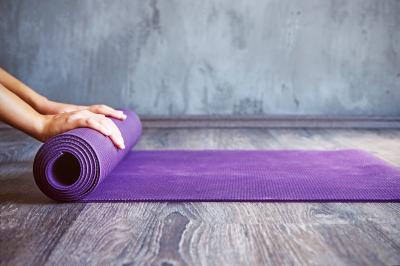 sianstock
Yoga and meditation are two of the more proven methods of inducing the transcendental state wherein deep insights and original thoughts flow more effortlessly. This is due to the prevalence of the same theta brainwaves present in daydreaming and REM (dream) sleep.

By: Matt Swanseger
A new year is upon us — which traditionally implies that it's time to thoughtfully assess our shortcomings and categorically fail to address them. Statistics show that nine out of 10 New Year's Resolutions never come to fruition. If you've ever experienced a frustrating lack of other Olympians and/or Asgardians to sip elixirs and compare six-packs and/or thigh gaps with, those numbers are disheartening. "Why, though?" as you fan yourself with a fistful of retirement money, accrued from months of prudent financial planning. Are they just not trying hard enough?
Just the opposite, actually. Many mortals grope blindly or lustily toward lofty goals and visions without first calibrating themselves for success. Although it may sound counterintuitive, the undoing of most Resolutionists is trying too hard or being too ambitious. According to the American Psychological Association, it is through incremental adjustments to lifestyle that we affect real change. For example, if you haven't set foot in a gym since the Clinton administration, chances are you won't be starring in a Rocky-style workout montage, eye of the tiger or no. The likelier outcome is dry heaving and contemplating an early retirement from the ring.
Ideally, resolutions will not be major stressors and you will not get too ahead of yourself. Therefore, before you attempt anything, it is crucial to step back, relax, and dial into the right frame of mind. In Western society, this is largely a foreign concept — we are conditioned to the notion of unabating "go" time. When we look to Eastern customs and traditions, however, we see the value placed on "slow" time. Millennia before the advent of modern neurology, Eastern philosophers and thinkers expressed this abstractly in terms of energy flow, but today's science can measure our mental state with electroencephalography. There are at least four (and as many as six) types of brainwaves, ranging from the low frequency, high amplitude delta waves of dreamless sleep to the much squigglier beta waves of active consciousness.
In between are the spacier squiggles of theta waves (passive rest) and the sawtoothed squiggles of alpha waves (active rest). Of these, theta waves hold the most potential and interest. They predominate in states of deep meditation, daydreaming, and the REM (rapid eye movement) stage of sleep. Here the subconscious is allowed to take over and we see what we're really made of — fears, hopes, transcendent thoughts and ideas. Focus turns inward, away from the externalities that we so obsess over, and creative and personal breakthroughs are well within reach. Wouldn't it be kind of nice to go there more often? Even if the real you is kind of messed up, wouldn't confronting the root causes of your problems be more efficient than giving them the big run-around?
There is great merit in taking a break from the outside world, an assertion corroborated by the growing popularity of yoga, massage therapy, and alternative medicine practices originating in the East that have made their way West, a territory that includes Erie. In this issue, we will position ourselves for an elementary understanding of the ancient art of yoga. Later this month, we will explore massage therapy and some more exotic procedures people undergo to redefine their energy.
Yoga bears fruit
Believe it or not, there's much more to yoga than Namastes, bodily contortion, and kale smoothies. Such is the case with a practice that is at least 5,000 years old. Historians divide its development into four phases:

1) Pre-Classical: Way back when (5,000 to 8,000 years ago) Brahman priests of the Indus River Valley compile their songs, mantras, and rituals into a series of Sanskrit texts called the Vedas. In a later series of texts called the Upanishads, the word "yoga" is first used. Around 500 BCE, a fellow named Vyasa established many of the core tenets of yoga, including that of sacrificing the ego through knowledge, action, and wisdom.
2) Classical: Maharishi Patanjali is the main man here with the compiling of the Yoga Sutras, his eight-limbed system for achieving enlightenment. This is the foundation of Raja, or Classical yoga.
3) Post-classical: A few centuries later, yoga masters began exploring the connection between the physical body and enlightenment. Tantra yoga outlines the techniques to facilitate a free-flowing interchange between mind and body. What many Westerners think of as yoga today, Hatha yoga, was defined in this era.
4) Modern: Yoga finds its way west in the 19th and 20th centuries. Key figures include Swami Vivekananda (author of 200 books, founder of nine ashrams and numerous yoga centers around the world), T. Krishnamacharya (founder of the first Hatha school in India and major influencer), and Indra Devi (opened a yoga studio in Hollywood in 1947, nudging it toward the American mainstream).

Today, there are so many yoga genres and subgenres that you'd be blown sideways trying to sort through them all (if you weren't perfectly centered). In terms of choosing the type of yoga that is right for you, area yogi Michael Plasha recommends outlining your intentions first: "If someone is already exercising — running, swimming, biking, or what have you — they would be well-served by a gentle or restorative yoga class. If someone is not exercising at all, they may want to shop around for a class that is more active, more strength-bearing and focused on flexibility and postures." An example of this might be the hot yoga offered at studios such as yogaErie, wherein the temperature in the room is jacked up to 90 degrees and the pace is generally quicker.
Plasha emphasizes that yoga — as most think of it, which is more or less restricted to the asana, or postures, and pranayama, or breath control — is only one piece of the "wellness puzzle" along with diet and exercise. A study by Columbia University monitored the most vigorous form of yoga and concluded it was only the equivalent of moderate walking, so it does not replace cardio.  He explains that "it is important to integrate mind, body, and spirit. If we only focus on physical, we may reduce stress we're holding in the body, but if we are not focusing on mind, it's all temporary. My approach in practice is to address the mental as well as physical. Sickness of soul, not nourishing spiritual self, that can also create disease in our life."
One way to tend to the mental and spiritual condition is meditation, a practice closer to the true essence of yoga teaching that you can implement seven days a week at no cost. According to Plasha, how one prepares to meditate is as important or more important than the meditation itself. "Create a place that will draw you to it … it doesn't have to be fancy; it could be just a chair or cushion to sit on, a little table with a vase of flowers or a candle or a picture of something inspiring," Plasha says, giving the personal example of a spare closet he converted into a "meditation cave." He also stresses that methodology can very greatly from person to person, depending on their temperament. For example, a very active or energetic individual may need to run for three to five miles before they sit to meditate and may only be able to sit for five minutes, tops. "Choose a method that you can dive deep into. Otherwise it's going to just stay on the surface."
With studies indicating that yoga can reduce lower back pain, risk factors for many diseases (75 to 80 percent of all diseases are either directly or indirectly related to stress), and migraine intensity and improve sleep, breathing, and balance, flexibility, and strength, it's not a stretch to think it might help you limber up for the twists and turns of the year(s) ahead.

There may be at least ten sun salutations ahead of you, but Matt Swanseger promises your e-mail is next in his queue at mswanseger@eriereader.com

by Abby Badach5/18/2011, 12:00 AM
For a writer, it's hard to turn off that inner narrator. Despite her best efforts to keep that narrative going, Abby Badach managed to turn it off and relax with some Yin yoga. But thankfully she turned it back on and wrote this column.