Dramashop pays homage to Edgar Allen Poe and his impact 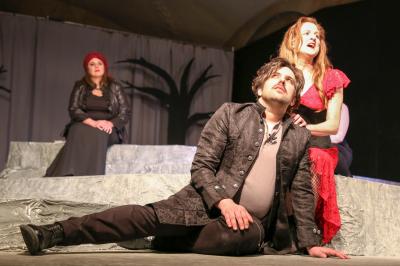 He is one of the most famous writers in American history, the word "poetry" cannot be spelled without his name, and his very works will soon be brought to life at Dramashop in a musical "of hopes and fears" — "Edgar Allan Poe's Nevermore," with music by Matt Conner and book by Grace Barnes.

Director Shawn Clerkin describes the musical as "the last clear moments Poe may have had in his life with the five most important women who had an effect on him." As his life flashes before his eyes, and he is forced to confront his inner demons, the audience will feel the passion of Poe's writing, as his poetry is put to music composed by Conner.

Clerkin directed a production of Nevermore many a year ago in 2009 at Gannon University where he is an associate professor. Zach Flock, the artistic director of the theater company, will be playing the tragic writer. Upon seeing the musical, he and Clerkin agreed "this is a Dramashop production."

The director admires the impact Poe has made on American literature, particularly the horror genre. He states that the musical portrays horror as "the muse and tormentor, the temptation that pulled him from the light, and toward the dark." Clerkin notes that the Dramashop production focuses on "contemporary issues told in contemporary ways," and the literary figure's experiences are just as relevant today. This exploration of Poe's tortured soul will no doubt stir something in the hearts of spectators, as well as any hearts under the floorboards. "The audience should have a chill up their spine," says Clerkin "but they should also feel empathy for him and what he went through."

Nevermore opens February 14th (a clever nod to the poem "Valentine"), and has weekend performances until March 1st. After that, the curtain "shall be lifted nevermore," for this production at least. It is a musical ride that will hold sway over all. — Claudia Rose