The Music Scene's Question of Imbalance

How ideological differences create venues for some and voids for others 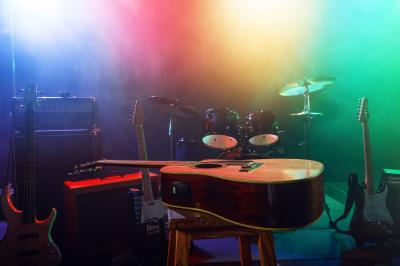 Voloshyn Roman
Opportunity abounds for Erie musicians to fill gigs, although context and genre has a significant impact on how readily bands are booked.

The Crooked i, Forward Hall, The Beer Mug, Bobby's Place, Scotty's, The Ballet Haus. Those are just a few of the venues in Erie that — over the years — have either ceased hosting regular live music, or closed their doors entirely. There are, of course, other venues where one can regularly check out local music (most prominently Basement Transmissions and The King's Rook Club) but even so, there's a void.

To many people, though, it might not seem this way.

If you look at our events calendar, there's music going on somewhere nearly every single day. So why cry for a few smoky bars?

These multitudinous events are important for several reasons. In addition to the fact that they entertain thousands of people, they also pay their musicians. Bars, restaurants, breweries, and wineries see the value of live music. Whether it's to create a specific atmosphere or to draw in crowds, these businesses are integral to a musician's lifestyle.

The issue here is that music isn't a monolith. There are different kinds of it, and I'm not talking about grindcore versus vaporwave. A thriving music scene should be able to support all manners of sonic self-expression.

Countless hours have been logged by local performers talking about this topic. In green rooms, over drinks, and at practice spaces, this kind of shoptalk is virtually ever-present, and endlessly interesting. Everyone has their own opinion on why things are — or more often aren't — working. There's no one issue to blame, and no easy fix, but it's important to define a few underlying distinctions.

Let's look at the spectrum of musicians. Everyone falls somewhere on the X and Y axis based on these two qualities. 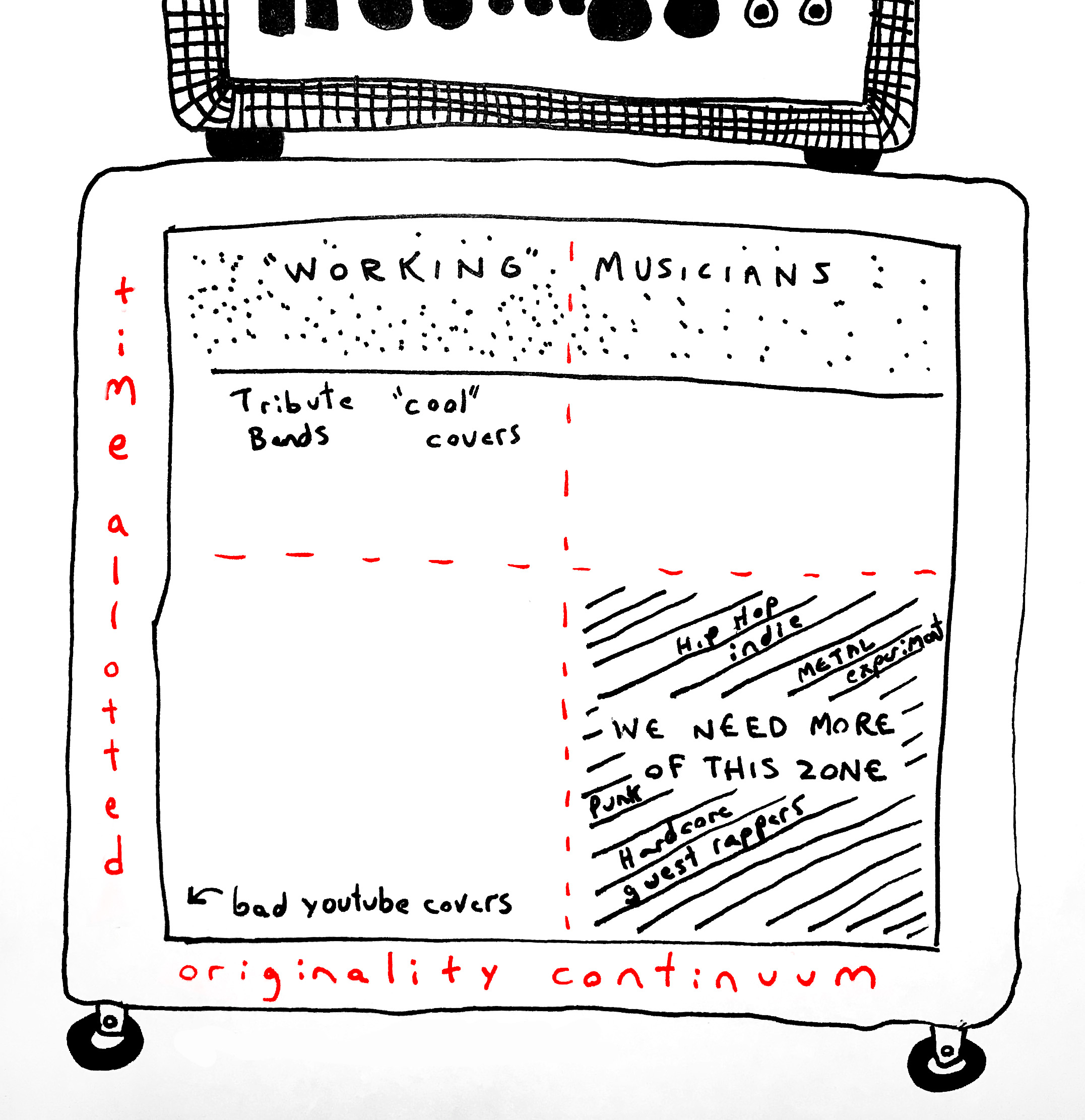 Time to fill: There's a big difference between playing a 30-minute set on a bill of five and doing a four-hour set to fill an entire evening.

Songs to play: One can make a decent living as a song stylist, tribute band, or cover artist. The creation of "original music," though, has long been the more lofty achievement.

I grew up on punk rock. We were used to shows with seven or eight bands. Fifteen-minute sets weren't anything absurd, especially when each song was under two minutes.

It wasn't until I played my first three-hour gig when I realized just how different it was. Even as just the bass player in a jazz combo one Friday night, I was the entertainment. You feel a sense of responsibility for entertaining your audience. Also, that audience was constantly shifting, and frequently not even paying attention to you.

A few summers ago, I played several of these kinds of longer gigs. One can barely even refer to them as shows, as you're more a feature of the evening than an actual thing worth seeking out. "Oh look, they have live music tonight, and half-price appetizers," a guest might exclaim, slightly more excited about discounted mozzarella sticks.

Sometimes, we would finish our songs to virtually no applause, other times it would be truly fulfilling, with a genuinely attentive audience. Nearly every night, someone would come up to us and tell us how much they enjoyed our set, giving me a thoughtful comment on my guitar tone, or well-deserved adulation for my singer's (Jess Royer's) voice. Those little interactions made those nights unforgettably special.

"I've gone into many prestigious-feeling gigs to have my hopes dashed by tepid responses, and come out of background music gigs feeling like a rock star," admitted singer-songwriter Tommy Link. "You never know which way the cards are going to fall."

Three-hour sets with no cost for admission are simply not made to be focused on. On a national scale, only the largest acts, with sizable catalogs of songs, set out to fill a time slot like that. Most touring bands play for about an hour-and-a half if they're headlining — this, of course, doesn't count for jam bands — while the opening band will get about 45 minutes, give or take. This includes the time between songs and an annoyingly well-rehearsed encore break. It's roughly corollary to the runtime of a feature film, albeit shorter (more often Dumbo's 63 minutes than Endgame's 182). Times might go longer if the show is seated versus standing room only, but either way, the crowd's eyes are pointed toward the stage, or at least their cell phones.

Filling this time can be difficult. To fill it with all original music is a nearly herculean task. It's here when covers come in handy even for the most prolific songwriter. "Personally, it varies from room to room," Link explained. "For dinner shows at restaurants or bar-and-grills, I'll often keep [things] cover heavy in an attempt to give people some familiar music while they enjoy their dinner or their night out. If a room seems particularly invested or open to the music and it becomes less of a background experience, I may lean into original music to see the response it gets." Link had a busy summer, actively gigging multiple times a week (Note: To see a take on being a working musician that's both hilarious and insightful, follow his comic Tommy In Toon in this very publication).

"Honestly, I have no interest in doing them, and hardly ever do," conceded songwriter Chris Ehrich. "We played a three-hour show over the summer and didn't play a single cover," he said, referring to The Honest Mistakes, which he plays in alongside his wife and songwriting partner Joylene. Ehrich has become one of the more active mainstays of Erie's music scene since moving to the city from Baltimore in 2016. "There are times I wish I was more interested in covers; it would certainly make longer sets easier," he joked.

"At the start, I was an untrained musician," guitarist John Johnston confessed. "So if I wanted to play music, I had to make up my own, because I wasn't good enough to play other people's." Though Johnston is humbly underplaying his abilities (he is, in my opinion, one of the most underrated guitarists in the area), it speaks to a certain mindset. Through former bands like The Telefonics, long-running project This American Song, and the recently-formed Tiny Paper Boats, Johnston has lived in the world of original music for most of his career, and surrounded himself with like-minded musicians. "That is where my passion is, where my creative flame burns. I've never really considered any other options. It is just kind of what I do, what I want to do. Play and write original music."

"Thankfully there are many kindred spirits who share this idea," Johnston affirmed.

This way of thinking is important. New music is made by creative artists; it's meant to be listened to and experienced. To facilitate new artists, we need to give them a place to play. Though the Internet makes the relationship between creator and audience more direct than ever, there's really nothing that can substitute for seeing it performed live.

Having avenues for a certain type of performance is a good thing. Longer "background" gigs are good things too. However, they tend to cater to only a few very specific forms of music: Acoustic singer-songwriters and cover bands. Important genres like punk, metal, and hip-hop find themselves largely out of luck.

Spacious bar venues like Coconut Joe's and Big Bar also regularly feature live bands, with performances multiple times per week. Most of the acts coming through are cover bands. While the crowds tend to be livelier and much more involved, artists run into similar issues that solo performers might.

"At heart I consider myself a songwriter, not a player. So what I'm really trying to do is write songs and play them, not just play songs to play," Ehrich explained. This touches on an important issue, distinguishing a songwriter from a song stylist. There are many fantastically talented people who feel quite differently from Ehrich. Excelling as a musician may for some be more a matter of craft and technical ability. Every artist has differing ideals. Some value creativity. Some value craft. Some want to tell a story. Some simply need to express themselves, no matter what. Each of these mindsets is important, and each lifts up the others.

The special thing about the places mentioned at the beginning of this article is that they were havens for new and original music. They were places that had shows with multiple bands on a consistent basis. They had a regular stable of attendees who were often musicians and creators themselves. They were places to go that were beehives of creativity.

There have been places picking up the reigns. Roman Glass spoke to me about how much the Erie Art Museum is looking to cater to live music. Places like Room 33 and the Brewerie at Union Station picked up where Scotty's Martini Lounge left off, with weekly open mics and trackside shows, respectively. Artlore Studio has a well-catered slate of performances, thanks in no small part to co-owner Stephen Trohoske, himself a bass player who has found himself all across the musical spectrum. Places like PACA find themselves being rented out for shows, with tickets selling out for bills filled by local bands. Calamari's hosted a successful summer music series comprised of local artists. Jekyll & Hyde's brings in nationally recognized indie artists on a semi-regular basis. The Tipsy Bean has a regular open mic night and performances ranging from folk to metal. The Erie Movie House hosts bands to pair with certain films, and has even become a haven for things like the electroFLUX experimental music series curated by Adam Holquist. This, of course, is only a partial list of all the businesses championing local live music.

Musicians will find a way. They're a determined bunch.

Nick Warren is currently without a band for the first time in more than four years. You can hear him play guitar at soundcloud.com/newwavecrashing or email him at nick@eriereader.com