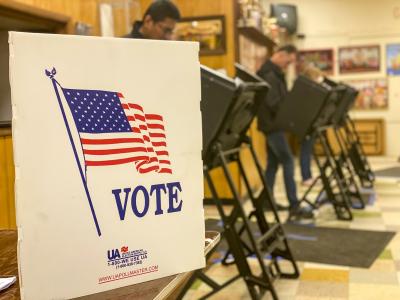 The votes are in. And while they're still being officially counted (all results are still classified as 'unofficial' despite all 149 precincts reporting), here are some key takeaways from 2019's Erie, Pennsylvania municipal election:

In the runoff for the Judge of Erie County Court of Common Pleas (of the five who entered the primary election, three made it to the general election ballot to vie for two open seats), the Democrats, Dave Ridge and Erin Connelly, emerged victorious.

The two vacancies are to fill the openings created by the death of Judge Robert A. Sambroak Jr. in March 2017 and the retirement of Judge John Garhart at the end of 2018. For a denser recap on the lead-up to the election, click here.

Ridge grabbed the frontrunner status out of the gate, with the first 20 precincts reporting, and while he yielded some minimal ground throughout the night, he never let the lead go.

Connelly, who saw a slightly larger chunk of her second-place lead dwindle over the night, held steady, too, garnering 3000-plus more votes than Smith.

It doesn't come as a surprise that Ridge and Connelly snagged early leads while Republican candidate Ed Smith inched up throughout the reporting periods. Precincts report in real time as per their proximity to the courthouse. Those closer – and closer to Erie's downtown core – lean Democrat. Those farther out in the county lean Republican.

Yet, the night – and the breadth of the county – didn't stretch long or far enough for Smith to catch up.

Republican incumbent Erie County Controller Mary Schaaf was 'Fousted' (coined by Erie Reader's own Adam Welsh) by, you guessed it, Democrat Kyle Foust, who upended her 26885 votes by 26,955 – a 70 vote (!) defeat.

In District 1, it turns out the choice was, indeed, clear, as Democrat Kim Clear handily defeated Republican Robert Yates, 59 percent to 41 percent. Clear takes over the post previously held by Kathy Fatica, who was serving out the remainder of the term of her late husband Phil Fatica. The seat remains in Democratic hands.

As I noted in council election lead-up coverage, in District 3, Mary Rennie had the least to sweat amongst County Council candidates. She defeated Democratic incumbent Fiore Leone, as well as Democratic challenger Freda Tepfer (no Republicans sought the seat in May's primary), to run unopposed in the general.

Filling the four seats up for grabs are four new faces, with Republicans stripping Democrats of one seat.

Keys, the political newcomer, led in the vote count, with Witherspoon trailing slightly and Brzezinski, who's seen stints on the Erie School Board and Erie City Council prior, coming up behind.

A tip of the civic hat to Republican Shawn Lyons and Independent Lewis Prest, who even if they pooled their vote tallies (5,029 and 3,246, respectively) still wouldn't have earned a spot on council at 8,275 – 870 shy of Brzezinski's share of the lot, for entering the race. Eight-thousand, two-hundred and seventy-five ain't zero.

Several Township Supervisor races of note were in Harborcreek, Millcreek, and Summit townships.

And peaking in Summit in a nail-biter, Democrat Jack Lee, Jr. upended Republican Michael Pace by a mere 13 votes.

Don't think your vote matters? Erie County has 13 folks who decided who will govern in Summit.

With all 149 precincts unofficially reporting, nearly 29 percent of those eligible to cast ballots did (for context, I bemoaned low turnout in a run down of previous elections in a recent feature). As stated above, several races were cut by razor-thin outcomes.

And it's not over, folks.

Casimir 'Kaz' Kwitowski, a Democrat on City Council, won his bid for the city of Erie Treasurer. Given that he'll head to a new post, his council seat will be up for grabs in a special election.

The times, they are a-changin', no doubt. The size of the chorus singing the song of change for Erie, however, is remainin' largely the same.

What this new tune with the same volume of singers will sound like into the future remains to be heard. And if I'm a betting man, I'd bet more folks jockey to grab a mic come 2020 when the amplification of their civic voice remains much smaller on a much larger civic stage.