With Fetterman and Shapiro victorious, we take by-the-numbers look at how Erie County voted 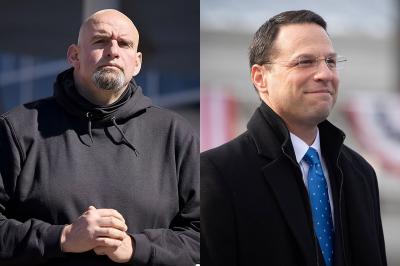 For Democrats across Pennsylvania, the results of the 2022 midterm elections signaled a big win. Early in the night, Josh Shapiro was declared the winner in the commonwealth's gubernatorial race, with John Fetterman clinching a victory as well to be sworn in as the next junior senator of PA after Republican Pat Toomey's term ends.

Governor-elect Shapiro currently serves as Pennsylvania's Attorney General, having been elected in 2016. Much like PA's senatorial race, this served to be one which was intensely followed by the national media. Shapiro's professional and seasoned political demeanor drew sharp contrast between that of his opponent, PA State Senator Doug Mastriano. A far-right Trump supporter who was at the Jan. 6 insurrection, Mastriano crossed police barriers with others headed to the Capitol Building. Between the two candidates, abortion became an increasingly important issue, among many others.

With a margin of nearly 675,000 votes at the time of this writing, Shapiro won Pennsylvania with a mandate of nearly 13%.

In Erie County, Shapiro received 61,977 votes to Mastriano's 39,895 with an even more sizable edge of almost 22%. Media outlets called the race for Shapiro fairly a few hours after polls had closed.

In perhaps the single-most watched Senate race in the entire nation, Lieutenant Governor John Fetterman beat out television personality Dr. Mehmet Oz. This race served to be much closer, with public concerns about Fetterman's health being an issue for voters, following the stroke he suffered on the campaign trail in May. At the time of this writing, Fetterman walked away with a 3% edge over Oz, garnering 2,601,639 votes to his opponent's 2,445,247.

At the time of this writing, Fetterman's win served as the only senate seat to flip parties, which could provide Democrats with a crucial 51 to 49 majority — with races in Arizona, Georgia, Nevada and Wisconsin having yet to be called

In terms of voting tallies, however, Erie County represented only one-third of the district-wide votes, additionally made up of Crawford County, Mercer County, Lawrence County, as well as part of Butler County, where Kelly resides.

Corry's Chelsea Oliver was defeated by Banta 10,172 to 16,304, with Banta garnering 61.6% of the vote to Oliver's 38.4%, by a margin of 23%. Banta will represent the Pennsylvania House's fourth district — which comprises of much of the southeastern portion of Erie County, yet included Girard after 2020 redistricting

Bizzarro bested challenger Joe Kujawa by a wide margin of nearly 28% in what turned out to be the closest race of the incumbent state representatives. The third district representative received 19,685 votes to Kujawa's 11,086, winning a sixth term.

Second District representative Bob Merski won out over Republican Michael Pace, defeating him 15,383 to 8,731. Winning by a margin of nearly 29%, Merski will enter his third term as state rep.