Get your turntable ready for a six-sided chimera of local talent.

by Nick Warren
View ProfileTwitterInstagramRSS Feed
November 25, 2015 at 9:30 AM 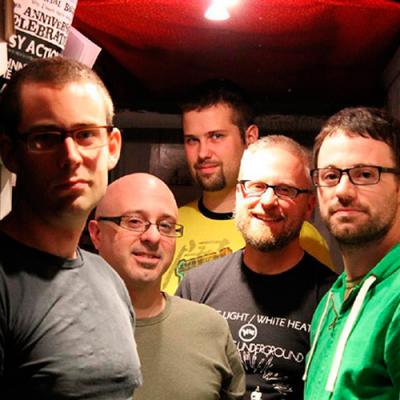 This American Song has some cool friends. They also love records. On the Saturday after Thanksgiving, they're combining them. Carrying on the noble punk rock tradition of split seven-inch records, they'll be releasing three in one night. Drop by this free show, and you'll be able to hear everything that was so recently emblazoned in wax.

Erie's own Rust Belt troubadour, Matt Texter, will open the show. Inspired by his country idols of yesteryear, Texter's soulful baritone and engaging personality will win you over instantly. Second on the bill is Planet Claire. This charming foursome is sweet enough to give you a mouthful of cavities. Sue Martin's vocals have the bite to nail their twee punk sound perfectly. Taking the stage next will be Erie's favorite MC, C. Brown. Catch every beat while Brown brings out verse after verse of soul-searching rhymes. As one of the strongest talents to come along in a while, it's no wonder he's won virtually every award the area can bestow.

After that, get ready for a rapid-fire treat, as each band will recreate the vinyl tracklist live. Sharing equipment, they'll alternate to play every song in order.

Local favorites This American Song will close out the night. You might already know members of this five-piece from previous bands like Telefonics, Black Rose Diary, Smoke and Mirrors, Plato's Cave, and the Go Go Rays. They bring their signature blend of Americana and indie, with a punk rock ethos.

But wait, that's not all! This show will also see the debut of Presque Isle Records, a new musical collective. The three records will be the first releases to bear the new logo (designed by Texter) for this budding label. Keep your eyes peeled, because you'll undoubtedly see more great independent artists added to this inclusive stable.

C. Brown and This American Song's Larry Wheaton recently sat down with The Whenever Show podcast to detail the event. Brown described his motivation, noting that "I'm trying to show people from the hip-hop world, and the scene as a whole, that even though we're all different, we should be working together."

This showcase might seem like it varies too widely in genre, but it feels just right. The acts are all personally connected to each other. And all of the songs were recorded by TAS guitarist John Johnston, right in his home studio.

Get your turntable ready for a six-sided chimera of local talent. The seven-inches will be available individually, or you can pick up a box set containing all three splits. The multi-colored records were pressed in very limited quantities, so be sure to snatch up this beautiful collaboration while you can! – Nick Warren