by Alex Bieler
View ProfileFacebookTwitterInstagramGoogle+RSS Feed
May 28, 2014 at 6:23 AM 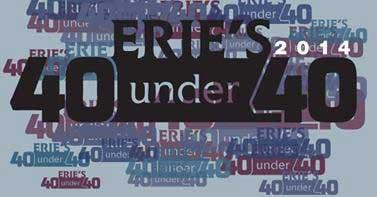 Recently, the Erie Reader unveiled its second-ever 40 Under 40 list, highlighting, well, 40 of the area's brightest stars before they finished their fourth decade on this world. The issue was a big hit with readers, showing off a mix of artists, physicians, entrepreneurs, and all types of folks who are helping to make Erie a better place in which to work, live, and play. However, we're not quite finished with celebrating our honorees just yet, as the Erie Reader presents the 40 Under 40 Summer Get-together from 6 to 8 p.m. Thursday, June 5 at The Brewerie at Union Station.

The event will feature not only members from the most recent batch of 40 Under 40 alumni, but the 2013 class will be on hand as well, creating a list of 80 individuals who have made an impact on The Gem City. Now it's your chance to mingle with our honorees, as the Summer Get-together is free and open to the public, allowing you to share a few drinks and hors d'oeuvres with some big players in the Erie scene while 40 Under 40 alums Zack Orr and Eric Brewer show off their musical skills that helped land them on the 2013 list.

We like to show off the bright spots in Erie, and on June 5, we'll get that chance again – with 80 reasons why this city has a bright future at the Summer Get-together. — Alex Bieler