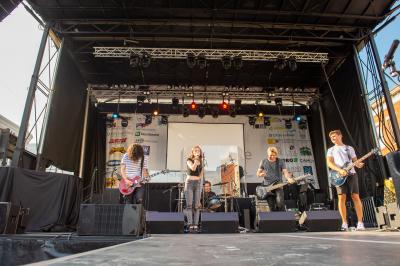 Sometimes the numbers just line up right. From Erie, all the way to State College and south past Altoona into Bedford, there's one thing that unites us beyond our shared Commonwealth. The three little digits at the beginning of our phone numbers tie us together as we represent the 814. What better time to celebrate this area then, than Saturday, Aug. 14, or by our American date formatting, 8/14?

In lieu of Celebrate Erie, which was canceled because of the pandemic for the second year in a row, the City of Erie, in partnership with Highmark Blue Cross Blue Shield and AHN St. Vincent, has created 814 Day.

There will be four major components to 814 Day: The 814 Summer Bucket List, the LegendErie Scavenger Hunt, a family movie night, and a multi-venue music festival.

Aaron Loncki, one of the event's main organizers, explained that with the bucket list "families can go out and use our hashtag #814bucketlist, take a picture during one of the 81.4 things to do in Erie, and each time they submit one, they are entered to win one of three prize packs." The contest began on June 1, and runs until Aug. 14. It's available at 814day.com and was made in conjunction with Macaroni Kid.

The LegendErie Scavenger Hunt began on July 15, and "follows the ghost of Ebenezer Crosby, who was a shipbuilder in 1812 for Daniel Dobbins," described Loncki. "The scavenger hunt is a cool way to learn a little bit about your hidden history, but also get out and about while you do it. It's interactive. It's a way that you can go with your friends with your family, to all 12 stops. There's a trivia question at each stop as well." Those that complete all 12 stops will be entered to win the grand prize of $1,000, which will be announced during the event.

Lastly, the 814 Day Music Festival features a lineup of 25 local bands performing at five different parks throughout the city. Guests can go downtown to Perry Square and Griswold Park, down along the west bayfront to Bayview Park, to Rodger Young Park along Buffalo Road, or to Washington Park on the city's west side. Bands will play from 3 to 9 p.m. at each location. Erie Apparel has even made specially designed shirts to honor the event, which you can order at erieapparel.co.

Loncki said that "hearing the word get out, and hearing people get excited about going to live music again and participating in something this summer that they actually want to do, that's really awesome for all of us. And I think the team wanted to fill that gap because we didn't have live music last summer."

For more information and a complete listing of goings on, go to 814day.com

Nick Warren can be contacted at nick@eriereader.com, or found at the Griswold Park Stage at 5 p.m.