by Nick Warren
View ProfileTwitterInstagramRSS Feed
September 26, 2018 at 11:45 AM 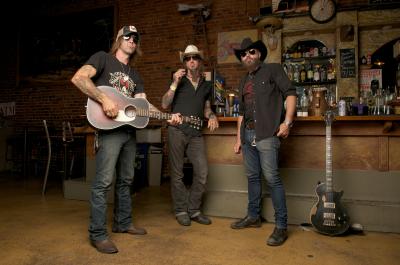 Thirty years ago, Supersuckers were formed. Three decades later, the band is still going strong with a new album and a special night all lined up. The trio is fronted by bassist Eddie Spaghetti — whose last appearance in town was a 2011 solo show at the Crooked i — and joined by guitarist Marty Chandler and drummer Chris Chango. Forging a riotous blend of rock'n'roll, punk, and country music, they've staked out a claim for themselves in the areas of — in their own words — "liquor, women, drugs, and killing." Their current tour boasts a "big show" with several standout sections. After an opening set from This American Song, Supersuckers will give fans a special country set along with songs from the band's latest album Suck It, which came out on Sept. 21. Then, they'll proceed to play The Smoke of Hell (which features gorgeous cover art by comic artist Daniel Clowes) and La Mano Cornuda (which describes the rock gesture "the horned hand") in their entirety. The two albums both come from the band's early days, and were released on the iconic label Sub Pop Records. They predate the group's move to the country-inspired "cowpunk" style with 1997's Must've Been High, as well as the track "Born With a Tail," a notable song thanks to the locally cherished band Dirt McGurtt. — Nick Warren