A Spotlight on Local Companies

These are just a handful of the innovative local companies that help to shape the Erie area's commercial/industrial landscape. 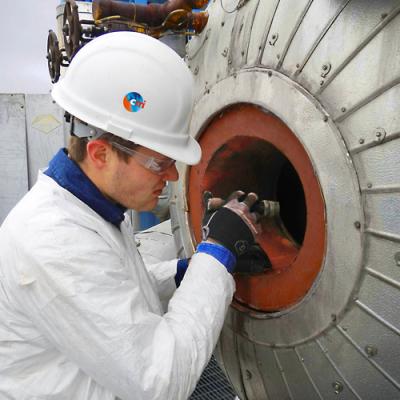 One is a website development company that's taken off throughout Erie – and well beyond – in recent years.

Another is a major player in the international energy industry, with a 175-year local history.

A co-working space that makes room for new local start-ups to grow.

Another company, also longstanding in Erie, is recognized as a world leader in magnetics technologies.

These are just a handful of the innovative local companies that help to shape the Erie area's commercial/industrial landscape. And, in this year's Industry, Innovation & Entrepreneurship Issue, you'll get to know each of them a little better.

Originally established as Presque Isle Foundry in 1840 – over a decade before the city of Erie was officially incorporated – the international company now known as CMI Energy has long been an industrial and economic powerhouse for the region, and around the globe.

In 1859, the company – then known as Erie City Iron Works – provided the engine used to drill the world's first oil well in Titusville.

In 1868, the company supplied Erie's water department a 264-foot standpipe – at the time, the tallest structure of its kind anywhere.

And by 1880, it was one of the largest boiler manufacturers in the U.S., securing itself an important and enduring role in the country's early industrial development. Some of its old records, in fact, are even archived at the Smithsonian Institution's National Museum of American History.

Impressive. But the 176-year-old company – which later became and was known locally until 2004 as Zurn Energy Division – is no relic.

With nearly 120 employees in Erie working with other engineering professionals around the world, CMI (now part of the nearly 200-year-old Belgium-based international corporation CMI Group) continues to develop technologies for a range of energy industry applications. That means engineering professionals in Erie are working on everything from combined-cycle power plants, solar-thermal power, and maritime energy to designs that address fluctuating energy demands and solutions for meeting ever-more-stringent emissions control standards.

In short, company officials say, CMI continues to create power technologies that truly have an impact around the world.

Beyond that, "we also foster progress by investing in Erie and its future, not only by providing professional career opportunities, but also by endowing student scholarships through Penn State University's Behrend College, and by promoting research and development in engineering and technology," says CMI Chief Executive Officer Yvan Moosmann. 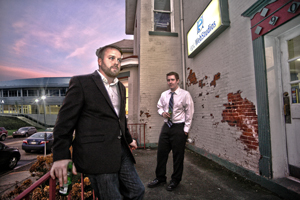 Behind every good website, there's a savvy developer – or a whole team of them.

In the Gem City, that team goes by the name Epic Web Studios, and it does everything from website design and development to social media, digital marketing, and search engine optimization.

Helping companies across the gamut develop a strong online presence, "we basically work day and night to make the businesses and industries here stand out as leaders in their fields," says Epic Web co-founder/managing partner/problem-solver/spokesperson David Hunter.

"We basically work day and night to make the businesses and industries here stand out as leaders in their fields," says Epic Web co-founder/managing partner/problem-solver/spokesperson David Hunter.

That's a very vital service to have at-hand in the business world, especially as many sectors of commerce and industry become increasingly connected and truly worldwide.

"It's of utmost importance to keep Erie visible on the international stage," says Hunter, and the Internet is "typically the first place [people] are going to go."

Started in 2009 by Hunter and Shaun Rajewski (the brain behind 29 million-and-counting lines of code), Epic Web now has a full staff of developers, designers, and other young tech nerds providing good Internet looks to over 300 unique clients – many of whom, they point out, are nowhere near Erie.

Like many longstanding Erie-based companies, Eriez Manufacturing – now the "World Authority in Separation Technologies" – started out way back in the day as a means to solveing a problem.

In its case, the day was the early 1940s; the problem was runaway bits of metal ("'tramp iron,"' they called it) in grain millers' equipment; and its solution (discovered by equipment seller and Eriez original founder, Orange Fowler Merwin) was magnetics. 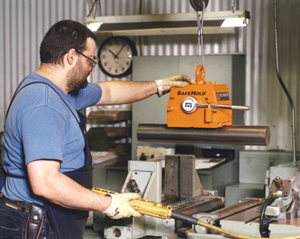 According to the company's history, Merwin, acting on complaints from his customers, researched a then new, very strong magnetic alloy, and, in 1942, developed and first marketed a permanent magnetic separator. Grain millers readily purchased the new technology: They no longer had to deal with stuff like wires and bolts and nails in their grains, and a new Erie manufacturing company was born.

Fast-forward seven decades or so, and Eriez is going strong, manufacturing and marketing an array of equipment for magnetic separation, metal detection, and materials feeding, screening, conveying, and controlling.

Now going far beyond just meeting the needs of local mills, Eriez officials say the company provides hundreds of products to more than 80 industries. You'll find their magnetized machinery at work in industries that range, according to the Eriez website, "from food to pharmaceutical; coal mining to mineral beneficiation; pulp and paper to rubber and plastics; ceramics to aggregates; foundries to textile; recycling to primary metals; industrial minerals to stone, clay and glass; tobacco to chemical; packaging to industrial machinery; power generation to coal processing; fabrication to automotive; transportation to lifting and rigging; and many more."

Leave it to an Erie company to have the know-how to help other industries separate their wheat from their chaff. 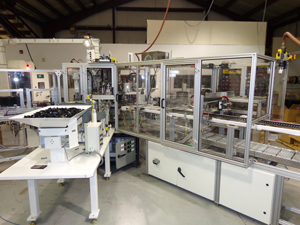 Ask company President Mark Fatica to explain in easy terms what Great Lakes Automation Services, Inc. does, and he'll tell you, basically, they work within the field of robotics.

That's because the term robotics "is a buzzword that everyone sort of understands," says Fatica, who launched GLASI – an officially-recognized Service Disabled Veteran Owned Business (SDVOB) that currently employs upwards of 60 skilled people – in nearby McKean in 2002.

Like that wide-open field of science and technology, the applications of automation services are nearly endless in the modern industrial landscape, and GLASI's services are widely used in everything from automobiles to medical devices.

The business of GLASI may be to create precise, efficient automation systems for a range of high-tech industries, but the heart of its success, Fatica is quick to say, is the people behind the machines.

"The people in this area – skill-wise and [with solid] work ethics – are huge for us," he says. And "the thing that makes us succeed is our local vendors," and other companies that have a demand – and repeatedly return – for the services GLASI offers.

For GLASI and many other companies, forging and keeping those kinds of cooperative, long standing relationships on the local level is a big part of what success in industry is all about.

And there's something very human about that.

Radius has been doing that since early 2015 after winning the Renaissance Centre's annual contest in which deserving start-ups go after a year's worth of free office space. Earning that accolade showed that Erie's business leaders saw the value of coworking – an emerging national trend toward open-access, collaborative workspaces – and the growing need for the availability of such space for other start-ups on the local level.

"The critical role we seek to fill," says Radius co-founder Sean Fedorko, is to "provide the lowest-cost, lowest-friction, highest-value opportunity for somebody to get started" in business, whether that person's needs are for physical work space, computers and other resources, or opportunities for idea-sharing amongst peers.

That's good work, and it's becoming one of the ways that people with new ideas are getting a lot of things done.

"Now," Fedorko says, "Erie is able to accommodate a lot of really great work that may have otherwise starved." 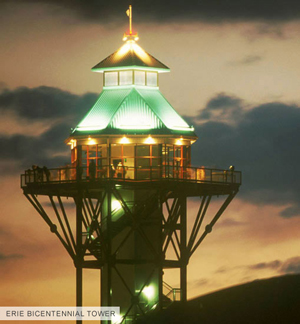 Whether it's working on restoring historic structures, building new sports and recreational facilities, or designing a $150 million project to bring urban office, living, and retail to Erie's bayfront, Weber Murphy Fox can count its successes as many.

But jobs well done aren't counted in numbers of new ribbon-cutting ceremonies, according to company officials: At WMF, they say, success is measured "over time, as people use the facility and experience the spaces that are designed specifically for the individual."

"We strive to understand our client's business so that our design solutions enhance the functionality of their built environments," says WMF Principal Dennis Wilkins. "We invest heavily in cutting-edge technology that affords our clients the ability to visualize design concepts, and better enables WMF to integrate our construction management services early in the design process, resulting in both time- and cost-savings for our clients."

The results of that investment of time and talent can be seen in plenty of buildings and spaces in and around Erie, and elsewhere.