Adult-Minded, Kid-Hearted Quartet Monk's Brew Mix it up at the Rook

The Monk's Brew offer a night of sweet, singing jazz. 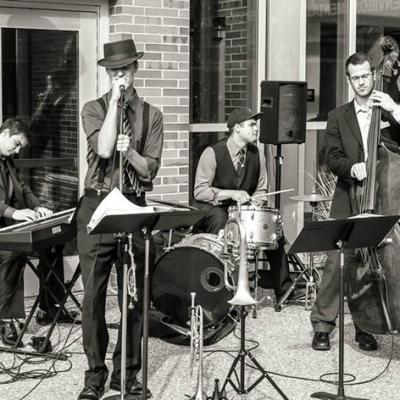 The members of The Monk's Brew reveal their youth in the types of collective interests they share on social media. Ya know, normal kinda-kid stuff: "Partying. Psycho Bears (sic). Prestige," and sausage-and-pepper subs at Teresa's Deli.

But, on second thought, it only makes good sense. After all, jazz (when it's done its due) is like that — a playful, complicated, powerful child, letting it all out, having fun, or frenzy, or whatever it feels, disguised the whole time as a smooth, sleek, all-grown-up character.

However you describe what it's been cooking up, The Brew has been a fixture of Erie's jazz scene since 2011, when its members started playing together while the four were attending Mercyhurst University. Since that time, they've been regulars at local venues, on JazzErie's annual Jazz Walks, on the air at WQLN 91.3, and opening for the likes of Grammy-nominated jazz great Chris Brubeck.

Next up, they'll be bringing their strong, smooth, signature sound to the King's Rook Club stage, offering a night of sweet, swingin' jazz.