Still mourning the dissolution of The White Stripes? Check out this rockin' duo.

by Alex Bieler
View ProfileFacebookTwitterInstagramGoogle+RSS Feed
August 6, 2014 at 8:45 AM 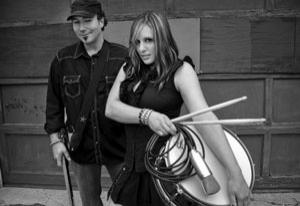 For people who are still mourning the dissolution of The White Stripes back in 2011, worry not, as there's another girl-guy rock duo hailing from the Rust Belt to help fill the void that was left when Jack and Meg White parted ways musically. In fact, Sirsy's team of Melanie Krahmer and Rich Libutti have been pumping out prime tracks since 2000, but for those of you not in the know about one of upstate New York's hardest-working bands, you can get a proper introduction when the Albany act visits The Brewerie Friday, Aug. 8 for a free show in the Beer Garden.

Despite the size of the band, Sirsy certainly doesn't skimp when it comes to volume, providing plenty of sonic punch from Krahmer's drums and vocals and Libutti's guitar work on everything from riff-heavy tracks like "Cannonball" to impressive vocal performances on heartfelt numbers like "Brave and Kind," both songs from the band's impressive 2013 album Coming Into Frame. The duo have been honing their style for a while now, so don't miss out on a free – once again, free – chance to see a band that can pack in so much rock 'n' roll talent into one duo. – Alex Bieler