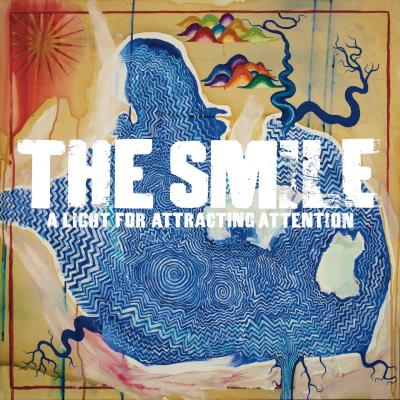 Let's start with the good and the bad, which ironically, are the same thing: A Light for Attracting Attention, the debut album from The Smile (featuring Thom Yorke and Johnny Greenwood alongside Sons of Kemet drummer Tom Skinner) sounds like it could be a Radiohead album. For fans, this is an advantage; the album shares a lush and subdued energy with Radiohead's last release, 2016's A Moon Shaped Pool. It simply isn't fair to compare, however, because what might typically comprise a weaker Radiohead album still makes for a pleasant and experimental art-rock record here.

Despite their quieter moments, The Smile really succeeds when opting to take left turns, such as with the snarling, #MeToo-referencing lead single, "You Will Never Work in Television Again." Elsewhere, between typical choir-like deliveries from Yorke, the band offers jittery post-punk ("Thin Thing") and woozy piano ballads ("Open the Floodgates"). These moments that stray from the path arrive courtesy of Greenwood and Skinner, who bring a frenetic energy to their genre-fluid instrumentals. It's better that A Light For Attracting Attention isn't a Radiohead album, as it gives The Smile a fair shake at exploring their own unique path. — Aaron Mook