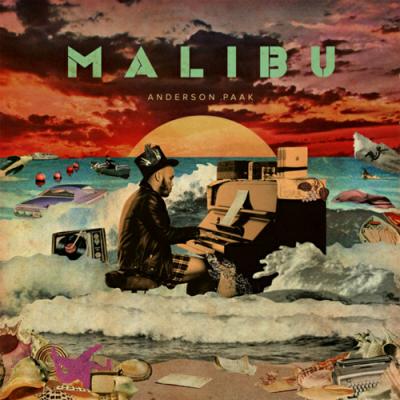 Anderson .Paak soulfully blends hip hop and R&B into a wonderful story. The titular setting of the album is Malibu. Dotted throughout the album are snippets of documentaries and movies, all about surfing. "The Bird" starts off softly with a personal coming-of-age story. Echoing, tinny piano mixes with muted trumpets. The album slowly ramps up as Paak begins speaking more romantically, sometimes addressing his love interest. Analog scratches paint some of the tracks before giving way to funkier, infectious grooves like "Am I Wrong." Instruments both live and sampled have a warm vibrato warble, as if finding an old, warped record. Even the most aggressive verses have a subdued feel. Guests like Schoolboy Q, the Game, and Talib Kweli all abide by the same principle guiding the whole album. Despite some low points like "Silicon Valley," there are plenty of peaks like "Celebrate." Paak became better known last year, appearing six times on last summer's Dr. Dre album, Compton. Setting his GPS an hour or so northwest, Malibu takes the listener on a smooth drive past rolling waves. – Nick Warren