All An Act's pre-recorded dress rehearsal streaming this weekend only 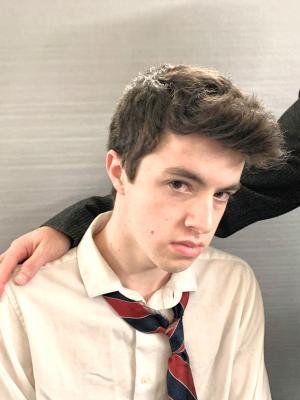 If it can happen in another country, it can most certainly happen here — 2020 made that painfully obvious. A "foreign" pandemic settled stateside. Police brutality, hate crimes, intimidation, and unrest — if they ever were perceived as distant phenomena — became uncomfortably immediate.

In this sense, the All An Act production of playwright Julian Mitchell's Another Country is perhaps even more relevant now than it would've been a year ago, when it was initially scheduled. Set in an upper-class, all-boys public school in 1930s England, the plot follows the plight of social outsiders Guy Bennett (a closeted homosexual) and Tommy Judd (a Marxist) after discovering a classmate's suicide. The story is loosely based on the real-life events of Soviet spy Guy Burgess.

It's a deeply affecting drama that shines a harsh light on the struggles of "the other," and one All An Act is pleased to share with Erie audiences. Through an arrangement with Concord Theatricals, All An Act is offering three opportunities this weekend to stream Another Country, recorded during last year's final dress rehearsal (prior to the COVID shutdowns).

Until All An Act can open again to live audiences, buy a ticket, open up the link, and prepare to open your eyes.

Defect to Another Country at All An Act (Event Canceled)