Aqueous Expects More Highs for the Rook on 4/20 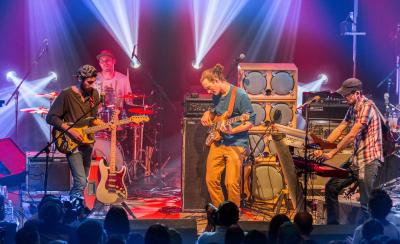 But I've come to realize that few bands get me in full-on groove mode more consistently and more genuinely (just, more) these days than Aqueous.

And man, I'm not alone swimming in those waters.

Now, don't get me wrong: Wherever they've gone, the Buffalo-based prog-jam powerhouse has been non-stop melting the minds right outta showgoers for a good handful of years now. But more recently, it seems, the flow of the waters they've been running has really picked up with unrelenting speed and awesomeness. And now … well, now, Aqueous is on fire.

They're a huge part — a feather in the hat, let's say, or an arrow in the quiver — of a vibrant, ever-changing, healthy, friendly live music culture that's been born both regionally and nationally in recent years. That's thanks in large part to a whole bunch of different, amazing and amazingly different bands, and to all the different and amazing people who come out to support them and feel the grooves they're gifting.

It's a give-and-take that, once you've experienced it, you just get it. And with Aqueous, you get it quick.

Almost from their start, Erie's gotten Aqueous, and has given them plenty of friendly ears — and they've returned the favor in kind many times — making the Gem City a home-away-from-home for the Empire State born-and-bred quartet.

They'll be making their way back to their local home-base, the King's Rook Club, for the first time in 2018 on Friday, April 20, so mark the date (just so you don't, um, space on it) for what's sure to be one for the books.

I caught up with half of Aqueous — guitarist/vocalist Mike Gantzer and bassist Evan McPhaden — on the fly recently for a quick little question-and-answer session, where they touched on stuff like their new album in the works, their recent bid for a spot on National Public Radio's Tiny Desk Concert series, the coming summer music festival season, and what's been on their personal playlists.

Here's what they had to say:

Ryan Smith: So, tell me just a bit about the Tiny Desk.

Evan McPhaden: The Tiny Desk (submission) video was another idea we've always wanted to do. We shortened our song "Underlyer" a bit, and kinda just went for it. We love slimming down our approach to our tunes, in terms of less pedals and making them bare bones, which you can see in that video or our Paste Magazine session.

RS: What's some of the stuff you're listening to most these days?

Mike Gantzer: Recently, I've really been in love with Fleet Foxes! I've also been listening to some cool jazz-influenced hip-hop, particularly an artist out of Chicago called noname. There's also a band called Mild High Club that I've been digging on, and also some Bill Withers, CKY, Metallica, and The Strokes. It's been an eclectic month for my listening tastes!

RS: Word is no one should ever miss an Erie show. Word? And elaborate, please.

EM: That's a good piece of advice! Erie has become sort of second home for us. It's probably the first area outside western New York where we saw people come out to shows and show support. We usually try to throw some surprises into those sets as well. But, overall, we feel comfortable, which brings out great improv, vibes and energy.

RS: Anything else you'd like to add on any and all things Aqueous?

EM: The future looks great right now! We're entering festival season where we're playing some awesome fests including Electric Forest, SummerCamp, Peach Fest, Cobblestone Live and Night Lights. We're also gonna be putting out a new album this fall with a big tour behind it. This album had a different approach for us, which was fun. Generally, we wrote tunes, played and tested them live, then recorded it, but for this album, we wrote songs thinking in a studio setting. There's a bunch of new tunes that have never been played live yet that we can't wait to dig into!