One new case of COVID-19 as social distancing practices continue. 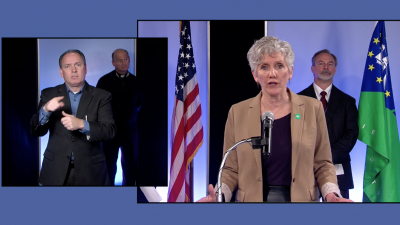 Noting that April is "County Government Month," Erie County Executive Kathy Dahlkemper, via livestream, informed residents of one new COVID-19 case yesterday, with 516 negative tests reported. The new case – linked to travel – is one of a patient in their 80s, who is currently hospitalized. This brings the total number of positive cases in Erie County to 17.

In the latest Social Distancing Scoreboard report from Unacast, Erie's score went up to an A- (Dahlkemper noted a prior score which was a "B"). This score is tied with eight other counties in Pennsylvania, including Allegheny County and seven eastern PA counties.

Pennsylvania currently stands at 47,698 negative cases, with 7,016 positive cases. So far, there have been 90 deaths across the state. As of yesterday, there was an increase of 1,210 positive cases with the additional deaths of 16 additional PA residents.

Shears began by noting that their collection site on West 3rd Street opened on Tuesday, March 24, to positive receptions. They have tested approximately 250 individuals to date. UPMC's telemedicine cases have rapidly increased, as they continue to expand their capabilities for such.

Jones stated that AHN is "leaving the planning phase and entering the 'sustainment' phase of operations," reducing the public entrances in all of their campuses. He remained confident of their supplies, stating that they had plenty on hand and were making arrangements for more. Daily testing is available in their west side pavillion on a scheduled basis by order of a primary care physician.

Jones praised the work of both the Erie County Department of Health and Dalhkemper herself through this crisis.

Rubino echoed Jones' statements, eloquently expressing that "these are difficult times. You have to make it up as you go along, and I think the County Executive and her team have made it up exquisitely well over these last three or four difficult weeks."

He cited that at Millcreek Community Hospital and Corry Memorial Hospital, they have tested approximately 120 people, with all cases coming up negative. He also noted an increase in telemedicine and telehealth boards as well.

Sommers noted that the VA Hospital has been actively screening, and has greatly limited access to community living centers. The VA has plans to open a drive-thru service, scheduled to be in operation later next week.

Dahlkemper praised our county's state-of-the-art healthcare services across the board.

Warning of relocating "snow birds," Dahlkemper strongly urged their children or others to do their grocery shopping for them prior to their returning to Erie County. Once back in Erie, they should quarantine themselves for 14 days and strictly follow all social distancing practices.

AHN, UPMC, and LECOM Health all cited their policy to keep their patient's information confidential, while the VA Hospital noted that no cases have been admitted to their facility.

While discussing area parks such a Presque Isle, Dahlkemper urged residents to self-regulate social distancing measures, as to stop any potential closures of local parks.