Arizona, Orwell, and the Banning of Ethnic Studies

What would George Orwell have thought about Arizona's law that prohibits students from thinking about different perspectives of history? 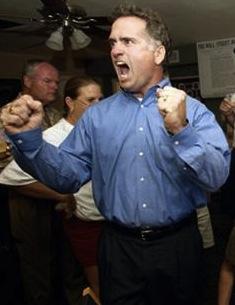 Arizona recently passed a law prohibiting any public school curriculum that includes "classes that are primarily designed for a particular ethnic group or that 'promote resentment toward a race or class of people." What that means is that any class that teaches students about Mexican-American history or includes any teaching from a Chicano perspective is banned.

Salon's Jeff Biggers explains what that means for the Tuscon school district, which last week agreed to knuckle under the state law, refusing to risk $14 million in funding:

In a school district founded by a Mexican-American in which more than 60 percent of the students come from Mexican-American backgrounds, the administration also removed every textbook dealing with Mexican-American history, including "Chicano!: The History of the Mexican Civil Rights Movement" by Arturo Rosales, which features a biography of longtime Tucson educator Salomon Baldenegro.  Other books removed from the school include "500 Years of Chicano History in Pictures," by Elizabeth Martinez and the textbook "Critical Race Theory" by scholars Richard Delgado and Jean Stefancic.

"The only other time a book of mine was banned was in 1986, when the apartheid government in South Africa banned 'Strangers in Their Own Country,' a curriculum I'd written that included a speech by then-imprisoned Nelson Mandela," said Bigelow, who serves as curriculum editor of Rethinking Schools magazine, and co-directs the online Zinn Education Project. "We know what the South African regime was afraid of. What is the Tucson school district afraid of?"

Biggers also notes that one of the texts banned by the state's office of public instruction is Shakespeare's "The Tempest." And, no, it isn't about Mexican-Americans. It was banned because of a common interpretation of the text as an exploration of racism and exploitation in the colonization of the New World by Europeans.

Think about that for a moment. The state has decided it's the proper arbiter about what people can or can't think about.  There was never any dispute about the factual or literary qualities of any of the texts taught in Tuscon's ethnic studies curriculum.

Not only that, but only Mexican-American culture and perspectives have been singled out under the law. What about the story of Thanksgiving? If there's a story more designed for a particular ethnic group and one that provokes resentment, it's that d*mn Squanto-and-Thanksgiving story schoolchildren across the country learn! Leslie Marmon Silko:

It's...absurd that anyone should even question the right of people to study their own history and culture. I think it's one of the many Geneva conventions, that indigenous people...are allowed to know who they are....Every day and all the years I was in school, and even now, we get white ethnic studies all the time.

It reminds me of a minor kerfuffle back in Montana over the coverage of Native American issues. A somewhat prominent, yet not quite mainstream conservative pundit accused the local paper of concentrating disproportionately on Indian issues, "far heavier than the attention given to other Montana ethnic, economic, and social groups." Of course, it took me all of twenty seconds to see his claim was untrue, simply by cracking open that morning's paper.

The lead story was about a ski jumping competition. The next was a story on wilderness proposals in the US Senate. The third story was about a Russian ballet performed by the local symphony orchestra. That is, a sport of European origin dominated by white athletes, a representative body deliberating according to Anglo-Saxon tradition and dominated by white men, and a European art form performed by musicians trained in Western music traditions and playing Western instruments.

Get it? If it's a report about the dominant culture -- Euro-Anglo, white American, whatever -- it's not explicitly mentioned. White culture is implied, it's the norm. To Natelson, a debate on wilderness bills is inherently neutral along the lines of race, ethnicity, gender. However, I suspect there's probably a young Native American woman out there who instead views the debate through the prism of her particular race and culture, who sees a bunch of old, rich middle-age white guys in suits and ties arguing over how they're going to divide up land that once belonged to her people. Her perspective is entirely legitimate.

But then, to those that support the Arizona law, 'perspective" isn't a tool that allows students to understand our world and their place in it, but a dangerous challenge to their ideological Nationalist politics. Like the former and current state superintendents of education, Tom Horne and John Huppenthal:

...Huppenthal and Horne exhibit a hyper-aversion to anyone addressing past social injustices in the United States, especially among the founding fathers. And this is a fundamental difference so profoundly explored in the film: Instead of viewing historic campaigns for civil rights, women's suffrage or child labor laws, for example, as inspiring lessons of change and transformation in the American democratic process, Huppenthal and Horne effectively demand that a censored presentation of American history be taught to Arizona children that casts modern society as colorblind and flawless -- and our founders as infallible.

Orwell, in Notes on Nationalism:

Every nationalist is haunted by the belief that the past can be altered. He spends part of his time in a fantasy world in which things happen as they should — in which, for example, the Spanish Armada was a success or the Russian Revolution was crushed in 1918 — and he will transfer fragments of this world to the history books whenever possible. Much of the propagandist writing of our time amounts to plain forgery. Material facts are suppressed, dates altered, quotations removed from their context and doctored so as to change their meaning. Events which it is felt ought not to have happened are left unmentioned and ultimately denied....The primary aim of propaganda is, of course, to influence contemporary opinion, but those who rewrite history do probably believe with part of their minds that they are actually thrusting facts into the past....