There is sure to be no shortage of things to see, hear, taste, and drink during ARTrageous.

by Nick Warren
View ProfileTwitterInstagramRSS Feed
June 7, 2017 at 11:00 AM 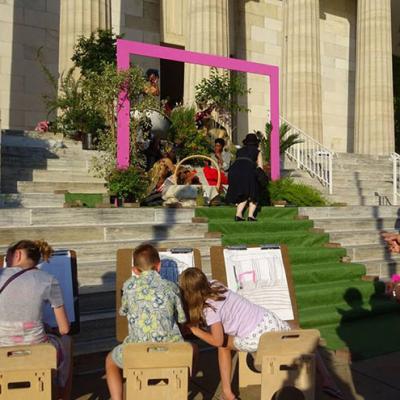 In its sophomore year, ARTrageous promises to be an event packed with reasons to attend. The evening is a benefit for the Erie Art Museum and is open to everyone. Evolving from the museum's "pARTy on the patio," ARTrageous will feature a wealth of activities. The event will honor museum director John Vanco for his nearly 50 years of service. While Vanco is set to retire towards the end of August, this will be his official send-off. There will be a champagne toast to Vanco, along with a display highlighting his career.

Stephen Trohoske and his band will provide a unique fusion of jazz and world beat. Abigail Adams Greenway and Masood Omari, better known as Tabla For Two, will play at the Cashier's house, filling the air with original music for hand drums (tabla) and harmonium.

The Reader's own Bryan Toy will even be painting on demand throughout the night.

There will be henna demonstrations at the Customs House, as well as screenprinting with Roman Glass of No Dress Code Studios taking place alongside the Carousel at the Frenzel Gallery.

If you haven't taken a look at the latest Spring Show, now's your chance, as the Main Gallery will be open to all ticket-holders. There will even be a silent disco going on for those eager to don lighted headphones and tune in to DJ John.

Self-proclaimed "Rust Belt Troubador" Matt Texter will be joined by voilinist/Diddly Bow master Lou Nicolia (who might just get mistaken for Vanco as the evening wears on) in the Nicholas Gallery on the second floor. Don't forget to bring your appetite, as there will be food provided by local favorites like Avanti's Restaurant, The Cork 1794, Franco's Cafe, The Plymouth Tavern, Make It Fabulous, Bourbon Barrel, Icing on the Lake, and Cali's West Catering.

Bill Sandusky will be creating an ice sculpture during the event, while different ice will be provided to guests who pick up an "adult sno-cone." There is sure to be no shortage of things to see, hear, taste, and drink during this fine evening in June. - Nick Warren