At Play in the Fields of the Bored: Do You Know Who I am?

He's back. And he's keeping his ego in check. We hope. Michael Bennett talks ego, music, and more. 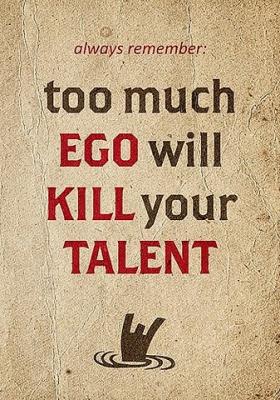 When it comes to being an artist there is a point on the x-y axis at which talent and ego must meet.

In order to be good you need talent, in order to be great you need ego. You need to be able to give freely of yourself and still have the bravado it takes to give your heart and soul to the world and not back down when critics lambast your work or when you don't hit the note or lose the tone or your piece isn't accepted into the show.

There is a madness that must take over you, a Jekyll and Hyde, a Frankenstein and his Monster.

Think Mick Jagger strutting around the stage, mouth agape, arms, bent at the elbows and tucked to his sides, prancing across the stage like a rooster leaving a hen house that just exploded from the amount of eggs produced.

Not just anyone could get away with that. You would look foolish; a cartoonish freak on stage, but the man not only pulls it off but also makes it look absolutely cool.

Music may just be the most difficult. You need to be known, you need image, you need to augment talent with display. Consider the multiple reinventions of Bowie, or the Sex Pistols, or the New York dolls; the music was infused with a look and a style to hold the visual as well as aural attention.

The tendency is to think artists are full of themselves, maniacal egomaniacs with a need to be seen and heard and displayed. A point where their entire existence is infused with the phrase "Attention must be paid."

Outlandish self-glorification can be off-putting to an audience, but it can be destructive for bands themselves.

Cream was one of the first "Super Groups." They were musicians who had made their bones in other acts, had their talent recognized, and the egotistical fortitude to create their own sound. But ego is a fragile thing. There is only room for so much Alpha male territorial marking in a band.

Eric Clapton and Jack Bruce couldn't stand each other by the end. Concert footage shows them moving further and further apart on stage, as the band got closer to destruction. Yet through it all they remained a huge band. So powerful was Cream that Ginger Baker, maybe the ugliest man ever in rock 'n' roll consistently got high class tail, simply for playing drums behind genius.

There is a scene in the Beatles' "Let It Be" documentary in which George Harrison and Paul McCartney are going through a song and George says, "I'll play whatever you want me to play, or I won't play at all if you don't want me to play. Whatever it is that will please you, I'll do it."

They were a broken band by this point. The crushing pressure of outrageous fame, and the artistic egos of McCartney and Lennon could no longer be contained within the group dynamic. And poor Georgie. His contributions to "Let It Be," "For You Blue" and "I Me Mine" are far superior to the hackneyed McCartney track "The Long and Winding Road." (Worst Beatles song ever!)

But it is evidence that even in a band where all four members had every right to be selfish and still prideful, unchecked and unbalanced ego will ruin a great thing.

Being part of a group, be it a band, an art collective, or even an alternative newspaper, ego and talent must maintain an even keel. It's about trust. About being able to weather the storm, finding faith in your fellow man that things are not done out of malice but out of love and respect.

Recognition of talent is one of the best ways to keep a hyper-ego in check. There is nothing worse than a talentless hack biting and gnawing at the heels of art by copping someone else's style or piggybacking on their ideas.

Like thinking you are Brian Wilson when you're really Mike Love. The Beach Boys were all about Wilson. And it is the perfect example of how someone from the lower echelon seeks to grab the spotlight away from their more talented cohort. When you have all the ego but lack the talent, you don't write a masterpiece like "Pet Sounds," you stand in the background clapping your hands and singing "Ba Ba Ba Ooo Mou Mou."

The local music scene has a way of tempering those occurrences. Erie is steeped in music tradition. Local audiences are well versed in the reality of a showman and the meanderings of a clown.

There are learned and respected elders of the scene that help to check the egos of young up-and-coming musicians to at least help delay the inevitable crash into the brick wall of reality.

There are more than a few examples in the local scene of bands whose front man (and for some reason it's always a man) gets a huge head, starts acting holier-than-thou and in the process neglects, negates, and neutralizes his band mates and brings an end to a good thing.

The really tragic part is that Erie doesn't easily forgive or forget.

It takes more than a teary mea culpa to rehab a tarnished image. No matter how great the music, no matter how much fun can be had, the rehabilitation of an overinflated ego is akin to the myth of Sisyphus… and for some local artists trying to keep an over inflated ego in check is far worse than rolling a rock uphill.

Artists by nature need to develop an ego, if for no other reason than to keep an overactive id in check. But checking that ego is of the utmost importance to maintain true quality and perspective towards their craft.

Michael Bennett does a fairly decent job of checking his ego, and knows he is far from a hack writer. If you would like to celebrate Michael's writing, he can be reached at onyourkneesvaillancourt@gmail.com.