Away Isn't a Waste of Space 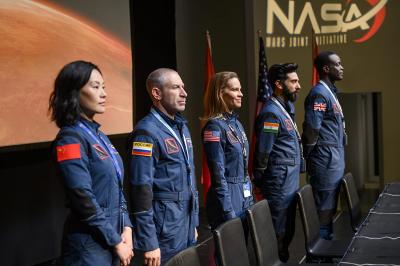 I didn't expect to love Away as I did. A series taking the Netflix number one spot for a week usually means a few things: It has fairly broad appeal, there's something buzz-worthy going on, and there's a fair amount of it to watch. All of these are true, of course, but there are a few things that make this populist space drama better TV than most. First, let's start with the obvious things. This is a show about Hilary Swank going to Mars. Having a two-time Academy Award Winner for Best Actress shoot a series that primarily takes place in space is unequivocally interesting. While Frances McDormand may still go to the moon one day, that doesn't make Away any less captivating.

Though Josh Charles (The Good Wife, Sports Night) is the only other well-known name in the series, this is entirely an ensemble cast. As Commander Emma Green, Swank wrestles with her driving ambition to go to Mars while still caring about her family — her husband and co-worker Matt (Charles) and her teenage daughter Lex (Talitha Bateman). On her mission aboard The Atlas spacecraft, she's joined by an international team of fellow astronauts. There's Misha (Mark Ivanir), the gruff, experienced Russian cosmonaut; Wang Lu (Viviaun Wu) of China, whose initial cold demeanor may be deceiving; Kwesi (Ato Essandoh), the Ghanan-born botanist and man of faith representing England; and Rom (Ray Panthaki), Green's suave Indian second-in-command. You'll know every character's name by heart three episodes in. By following each character's backstory, but not relying on too much of a Lost tribute (despite the title … wait a minute), the viewer really grows to know each of the character's inner workings. While it doesn't have the quirks and punches that make a truly great drama (think Mad Men, The West Wing, etc), it excels at yanking your heartstrings against a breathtaking backdrop of zero gravity. – Nick Warren