Back in Black!: Black Panther

Black Panther is a Superhero Film with Some Smart Ideas 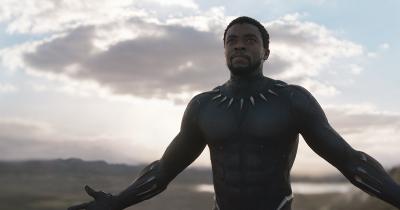 We are now well into Phase 3 of Marvel's Cinematic Universe and the company is finally letting directors put some unique ideas into their stories of costumed heroes punching bad guys. As a result, Ryan Coogler's (Fruitvale Station, Creed) Black Panther contains some very interesting themes and storylines that sadly give way to the standard superhero action spectacle that is all too common in these types of films.

The film follows T'Challa (Chadwick Boseman), the newly crowned king of the super-advanced nation of Wakanda as well as its mysterious protector known only as the "Black Panther". However, when he is confronted by a challenger to the throne (Michael B. Jordan), T'Challa begins to question his country's ideals as well as the things his predecessors did in order to keep Wakanda hidden.

The film asks some very smart questions about isolationism in the face of global catastrophe as well as a nation's responsibilities for helping those less fortunate. Unfortunately, these interesting ideas are thrown aside in the third act for the typical "good guys punch the bad guys" finale. Despite the meandering action and the unnecessary runtime, Black Panther does have some top-notch performances (especially Jordan and Lupita Nyong'o) and stylish visuals to make it an entertaining superhero flick ... though not quite the "revolution" that the studio has been promising. — Forest Taylor