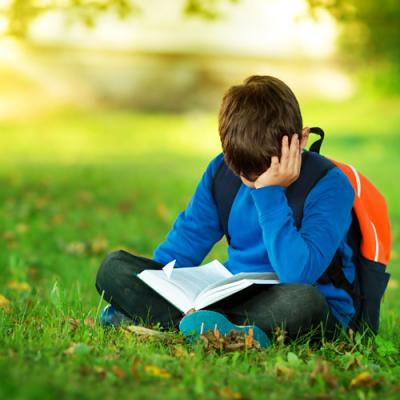 Going back to school is a time of change. Periods of transition can be some of the most stressful moments of our lives, for both children and parents alike.

As summer ends and fall creeps in, the school year begins again. For those who live with anxiety and depression, these times can hit harder than expected. Changes in day-to-day scenery, seasonal weather shifts, and the altering of sleep schedules can have a major effect on a person both mentally and physically. Switching from one routine to another isn't always easy. It's important to know that there are ways to make the back-to-school experience a potentially much smoother one.

Mandy Fauble, Ph.D., executive director of Safe Harbor Behavioral Health of UPMC Hamot, and mother of three, was able to give some helpful advice for this trying time of the year.

Nick Warren: What are some things about school that cause stress?

Mandy Fauble: "Think about a typical school environment, and there's a lot of change, a lot of people, and you can feel less in control of your environment."

NW: How can parents start to prepare their children before school starts?

MF: "For caregivers of all kinds, one of the first 'life hacks' is that, when you're going through a transition, do it one step at a time. So, if a lot of parents let their children stay up later in the summertime, it's significantly easier to start gradually rolling that back a couple of weeks before school instead of just thinking 'well, this weekend, when you go back to school on Monday, that's when we'll start.' Those kinds of things help, trying to get gradually back into the routine.

Try to do things in way that makes sense for when you and your children feel the most motivation, and when you feel the most energy. A good example would be [that] most people know if they're morning people, or not. So if you're not a morning person, that's probably not the time to try to do homework or [be] packing lunches [laughs]. Mornings aren't going to be best for you and you know that you're setting yourself up to feel stress. Asking yourself 'am I a person that it works best for me to do it the night before?' And then try to put yourself in a position to do that."

NW: What about homework, and how that fits into the daily schedule?

MF: "For many parents, homework is a stressful time. What the parent feels is the best time to do homework may not necessarily be the time that the child is able to be the most productive. One thing that sometimes people do is that they don't want their child to watch TV or play before they do their homework – and I completely understand that – for some children that's the best possible thing because once they play, it's very difficult to bring them back, but for other children, they actually need that break, and when they get that break they're able to focus. Maybe they need a snack, or 20 minutes where they're not playing, but they just need some downtime. There's not a recipe there, so much as that it's important that we try to learn more about ourselves, and do things when it's easiest, because that's less stressful and that creates less conflict.

Try to have a family calendar where people can communicate about what it is that they need and when, who's going where at what time, etc. We live complicated lives; sometimes grandparents are helping, or an aunt or uncle, neighbor, or friend or our partner, and we need to communicate with whoever is impacted by all of these schedule changes, because the more we communicate, the less likely there is to be conflict, because we're not telling people at the last minute that we need to do something."

NW: Besides the children themselves, who else is it important for caregivers to communicate with?

MF: "If you have a child who has struggled in school academically, emotionally, or by bullying, or had behavior problems, we encourage that the caregiver reaches out to the teachers and guidance counselors and that there's a proactive plan. Just letting those people know that you're invested or interested, it definitely eases communication because it gives you time to establish a relationship with those people. Then the very first conversation you have isn't at a time of crisis. This could help you better understand what the classroom setting is like.

The unstructured times tend to be the most difficult for kids: riding the school bus, lunchtime, between classes. Those are the times where there's not as much adult supervision. These times are especially difficult if you're dealing with anxiety or depression, both of which can really make you feel like you don't belong, and you can't relate to people. Someone said to me 'I watched other people talk and I couldn't figure out how they could do that because it just seemed so easy.' You can feel alone in a crowd."

NW: The anxiety that children feel seems to parallel the anxiety that adults feel. Personally, as someone who deals with anxiety and depression, I can understand where they're coming from, having different coping mechanisms as a child than as an adult; it might be a very difficult struggle.

For a lot of grownups, they see a younger child who maybe has a tough time sitting still and the first thing that they might think is that the child has ADHD, when in reality, it might be that the young person is anxious, so their body is moving because they're just uncomfortable.

MF: Unfortunately, anxiety can manifest when you're younger, in kindergarten or elementary school. ADHD tends to manifest more during late elementary or early middle school. But for a lot of grownups, they see a younger child who maybe has a tough time sitting still and the first thing that they might think is that the child has ADHD, when in reality, it might be that the young person is anxious, so their body is moving because they're just uncomfortable. Young people don't communicate the way that adults do. For a younger person with special needs, they tend to get the message that they should just 'sit still and behave,' as opposed to teaching them the skills that they need.

We want to encourage people that there are resources out there, and certainly there's counseling, therapy, or medication if needed, to professional services like ours. But beyond that there are basic things that caregivers can teach children to do, like breathing exercises, counting, and just being supportive.

Unfortunately, with anxiety, people tend to avoid the things that make them anxious, but avoidance actually makes the anxiety worse over time."

In addition, Fauble offered up several other helpful tips:

Keep a journal of communication, either handwritten or online. Chart progress and keep the lines open.

Know who to talk to and when. Be familiar with the adults in charge, especially during unstructured parts of the day.

Sometimes experiences feel familiar. Does the back-to-school experience remind you of starting a new career? Be empathic and able to draw on what you've learned yourself.

Find the best time to talk. Don't interrogate. Be patient, and wait for a time when your child seems most receptive to communication.

Ask creative questions. Instead of just "how was your day?" find a fun way to make them think about their answers. You could even make a tradition out of it.

Be invested. Know about your child's peer group, and understand the media that they're consuming.

Let them know that they can call the Safeline at 814-456-7233 (456-SAFE) if they need a confidential, free way to talk to about bullying, troubled thoughts, and other serious concerns.